Home › News
France ready to finance the next Fukushima
Paris, July 12th, 2011 – Today, in a letter sent to President Sarkozy (1), more than one hundred organisations around the world officially asked France not to finance the nuclear power plant project in Jaitapur, India. This future atomic complex presents major risks for India and the world.
By: Les Amis de la Terre, Greenpeace
2011-07-12
Paris 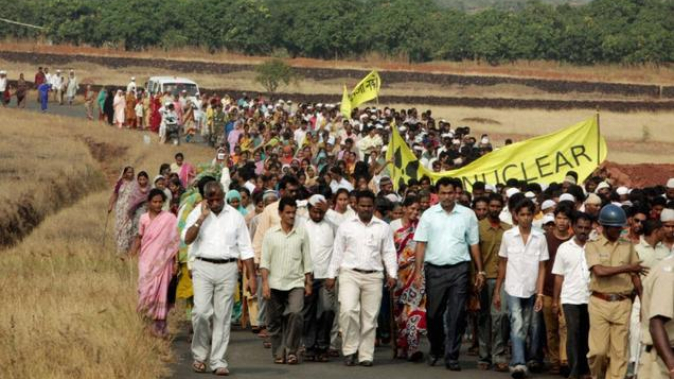 “While the Fukushima catastrophe is still ongoing, the French state brings its financial support to the building of a nuclear power plant on a seismic fault in a populated region of India, explains Sophia Majnoni, nuclear campaigner for Greenpeace France. The government persists in its archaic choice of nuclear, whatever the costs, even if it poses enormous risks to populations. This backward attitude has to stop. France needs to not only change its own energy model to get out of nuclear and enter in the modern age of energy savings and renewables, but must also allow emerging powers to develop peacefully, helping them to develop clean energies that are not from the 1950s.”


Areva plans to build two EPR reactors in India in a region and a country that do not satisfy the security conditions of this type of installations at all. Not only is Jaitapur located in a zone where the seismic risk is elevated, but the Indian Nuclear Safety Authority is not independent, and many security flaws have been witnessed in the past few years on existing nuclear plants. India is also one of the only countries in the world that has not signed the Nuclear Non-Proliferation Treaty.

Moreover, the local population is strongly mobilised against this project. At the same time however, the repression of these demonstrations has been even stronger and more aggressive leaving one demonstrator shot dead in April 2011.

“Before it even started, this project had already led to serious human rights abuses”, adds Juliette Renaud, campaigner on financial actors’ accountability for Friends of the Earth France. “It has violated Indian and international regulations by denying to the civil society the access to the Environmental Impact Assessment and by proceeding with forced land acquisitions, without even consulting affected populations. The French government finds itself in front of a crucial choice: to continue to promote its nuclear exports whatever the costs, or favour populations’ security and avoid high social and environmental impacts by withdrawing its support to this dangerous nuclear project.”

Since French nuclear is difficult to export, in recent years France took the habit of systematically delivering, through Coface -the institution delivering the French public guarantees-, a public insurance on EPR construction projects abroad (Olkiluoto, Taishan and now Jaitapur). This is why a letter has just been sent to French President Nicolas Sarkozy, asking France not to finance this project. Coming from more than thirty countries from all five continents, more than one hundred civil society organisations, including Friends of the Earth France and Greenpeace France, have united to write this letter.

(1) The letter is available here: