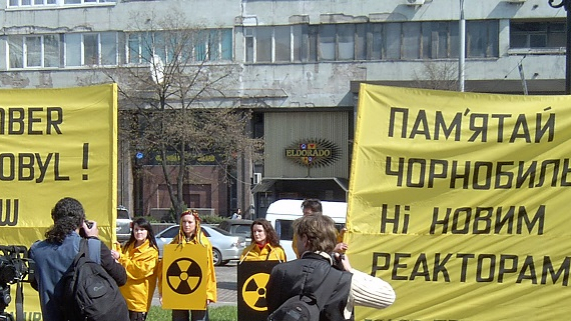 While the Kaliningrad nuclear project, in Russia, faces important technical and financial difficulties, France is trying to make it survive whatever the cost. French ambassador to Russia, Jean de Gliniasty, went on Monday in person on the construction site to support the project and urge Russian authorities to go ahead with this project. This support for a dangerous project to which the local population is opposed, as clearly shown by a recent poll, is unworthy. It reveals the hypocrisy of French authorities on the lessons drawn from Fukushima. Les Amis de la Terre and Ecodefense demand that France let this project die in peace, and that Société Générale withdraw from it immediately.

The Baltic nuclear power plant project, located in the Russian enclave of Kaliningrad, between Lithuania and Poland, has faced important difficulties for several months now. Several news items these past few days revealed a recent decision by Russian authorities to modify substantially the project and the type of reactors planned to be built. Rosatom, the Russian company leading the project, is now considering building smaller reactors, like the VVER-640 or KLT-40S reactors (640 or 40 MW), rather than the two bigger units of 1 150 MW each. The company has one month to make a final decision on this. On the ground, local contractors talk about a complete suspension of the job, started in 2010.

This decision can be explained by the difficulty of the promoters of this project to find financing and concrete prospects. As Ecodefense, the leading Russian NGO against this project, and les Amis de la Terre, have underlined for months now, none of the neighbouring countries want the future potential electricity produced by this power plant. Worst, the Kaliningrad enclave could be totally electrically isolated in coming years with the integration of Baltic states to the European grid. This would stop the nuclear power plant from any prospect since this project aims specifically at penetrating the European electricity market.

In this context and following this news, the French ambassador in Russia, Jean de Gliniasty, decided to visit the construction site of this project in person, to confirm the support of France and the involvement of Alstom in this project, whatever the cost. Vladimir Slivyak, co-chair of the Russian NGO Ecodefense, denounces this support: "This support by French authorities goes directly against the will of the majority of local inhabitants, 48% of them opposing the project against 30% supporting it, according to a new poll published only a few days ago. It also totally omits the important deficiencies of the project's Environmental Impact Assessment regarding waste management, dismantling and potential impacts of a major nuclear accident. We have been mobilizing against this project since 2007 and this mobilization is starting to pay off. The French ambassador should not worry so much about this project and should let it die in peace. It should on the contrary support the development of renewables in Russia".

Yann Louvel, climate and energy campaign coordinator for the BankTrack network, concludes: "This official support reveals the total hypocrisy of French authorities, claiming to draw all the lessons from Fukushima while continuing to actively support the building of nuclear power plants in countries as corrupted and dangerous as Russia. Les Amis de la Terre demand that the French government and Coface withdraw immediately from this project. The same demand goes to Société Générale, which is responsible for structuring the export financing of Alstom turbines for this project."