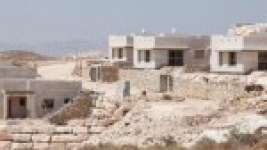 Dutch pension fund PGGM announced on the front page of its website today that it had withdrawn tens of millions of Euros worth of investments from five Israeli banks.

The fund cited the banks' unethical and illegal practices in the West Bank.

PGGM said in statement that it had been in discussions with Bank Hapoalim, Bank Leumi, the First International Bank of Israel, the Israel Discount Bank and Mizrahi Tefahot Bank for several years.

The fund had tried to convince them to reconsider their financial backing for Israel's West Bank settlements which "are considered illegal under international humanitarian law" - but to no avail.

PGGM said "given the day-to-day reality and domestic legal framework they operate in, the banks have limited to no possibilities to end their involvement in the financing of settlements in the occupied Palestinian territories."

This is a reference to 2011 Israeli legislation which outlawed any form of boycott, rendering it a legal tort - something punishable with potentially heavy fines.

PGGM manages the pensions of 2.5 million people and claims assets worth more than €153 billion ($208 billion).