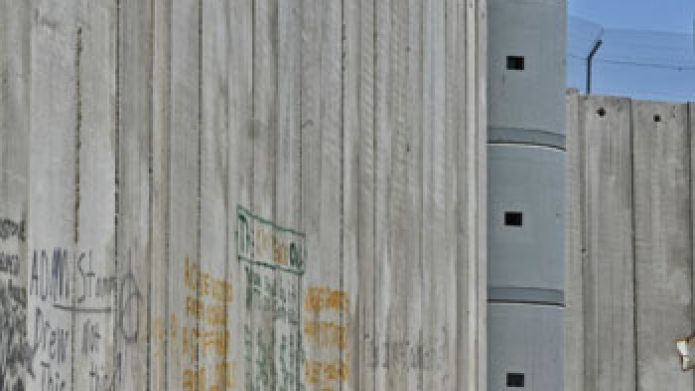 Occupied Palestine - Germany's biggest bank Deutsche Bank has divested the bank's 2% stake in Elbit Systems, an Israeli arms company that supplies the Israeli military and provides components for the Apartheid Wall in Occupied Palestinian Territory that was found to be in violation of international law by the International Court of Justice.  The announcement at the Bank's AGM today follows a concerted campaign from German human rights organisations.

As part of a long term campaign, Pax Christi and International Physicians for the Prevention of Nuclear War (IPPNW) asked Deutsche Bank shareholders to vote against a routine motion of confidence in the board of directors because of their failure to divest from Elbit Systems, and activists held a lively demonstration outside the AGM in Frankfurt am Main.

In response, Deutsche Bank chairperson Josef Ackermann told the AGM, "Deutsche Bank is out of Elbit". Ackermann went on to explain that the bank could not invest in Elbit because of its commitment to voluntary codes of conduct such as the UN Global Compact and even went as far as to deny that Deutsche Bank had ever held shares in Elbit, in direct contravention to figures published by Nasdaq.com.

Wiltrud Rösch-Metzler, Vicepresident of Pax Christi Germany, said, "The end of the investment in Elbit is a huge success. Deutsche Bank assured us that they do not have investments in Elbit. They went out of their way to list numerous standards and international ethical commitments to which the Bank is party to, highlighting how Elbit investments would violate them all. This statement is a landmark position that should guide other German, European and global finance institutions", she said.

In a passionate speech, Rösch-Metzler had earlier told the AGM: "Do you still remember the days of apartheid in South Africa? Palestinians call it an Apartheid Wall, because it surrounds them, closes them in, shuts them into enclaves; because this Wall creates Palestinian Bantustans. How can Deutsche Bank profit from the oppression of Palestinians? If obvious human rights and international law criteria are violated, will the Deutsche Bank continue to be co-responsible for this?"

The chain of divestments from Elbit started when Stop the Wall, the grassroots Palestinian anti-apartheid wall campaign and a long term partner of IPPNW and Pax Christi, moved together with its Norwegian partners to persuade Norway's Minister of Finance Kristin Halvorsen to announce that the Norwegian State Pension Fund had sold its shares in Elbit, worth $5.4 million. Inspired by this, campaigners in other countries started pressuring finance institutions on the issue. Danske Bank and PKA Ltd, two of the largest Danish pension funds, Folksam, Sweden's largest asset manager and ABP, a Dutch asset manager, have all divested their funds from Elbit Systems.

A spokesperson for the Palestinian BDS National Committee (BNC), a wide coalition of the largest Palestinian mass organisations, trade unions, networks and organisations, said: "Palestinian civil society warmly welcomes the principled decision taken by Deutsche Bank's to end its complicity in Israel's oppression of the Palestinian people. This decision by a bank of the clout and size of Deutsche Bank, particularly following similar steps by a number of Scandinavian financial institutions, shows that social and ethical responsibility cannot be ignored in conducting international business. The BNC calls on all people of conscience and supporters of universal human rights in Germany to continue their efforts and to ensure that other German institutions follow the example of Deutsche Bank and divest from Elbit and every other company, Israeli or international, that profits from Israel's occupation and apartheid."

a.       As of March 312010 Deutsche Bank still owned 2% of Elbit Systems and was the 5th biggest investor in the company. See: http://www.nasdaq.com/asp/holdings.asp?symbol=ESLT&selected=ESLT

b.      Elbit Systems is an Israeli weapons company that provides electronic detection fences for use in the Israeli Separation Wall in Occupied Palestinian Territory. The company supplied UAVs (Unmanned Aerial Vehicles) to the Israeli army, which are in operational use in during combat in the West Bank and Gaza.

d.     Pax Christi International is a non-profit, non-governmental Catholic peace movement working on a global scale on a wide variety of issues in the fields of human rights, human security, disarmament and demilitarisation, just world order and religion and violent conflict.

e.       International Physicians for the Prevention of Nuclear War (IPPNW) is a non-partisan federation of national medical organizations in 62 countries, representing tens of thousands of doctors, medical students, other health workers, and concerned citizens who share the common goal of creating a more peaceful and secure world freed from the threat of nuclear annihilation.  This year's annual General Assembly of the German section has called on the Deutsche Bank to end its investment in the Israeli arms corporation Elbit. Deutsche Bank has 2% of the arms company and is the fifth biggest investor in Elbit. IPPNW is a long term partner of Stop the Wall.

f.       Stop the Wall is a grassroots Palestinian campaign against the apartheid wall. The Palestinian grassroots Anti-Apartheid Wall Campaign is a coalition of Palestinian non governmental organizations and popular committees that mobilize and coordinate efforts on local, national and international levels. These efforts are focused upon stopping and dismantling the Apartheid Wall, and resisting Israeli occupation and colonization. A call for a coordinated, popular, and grassroots effort to tear down the Wall came out of Jerusalem on the 2nd of October 2002, from the office of the Palestinian Environmental NGOs Network (PENGON).

g.      The Palestinian BDS National Committee is a broad alliance of Palestinian political parties, trade unions and NGOs. In 2005, Palestinian civil society issued a unified call for a campaign of Boycotts, Divestment and Sanctions against Israel until it complies with international law and Palestinian rights.