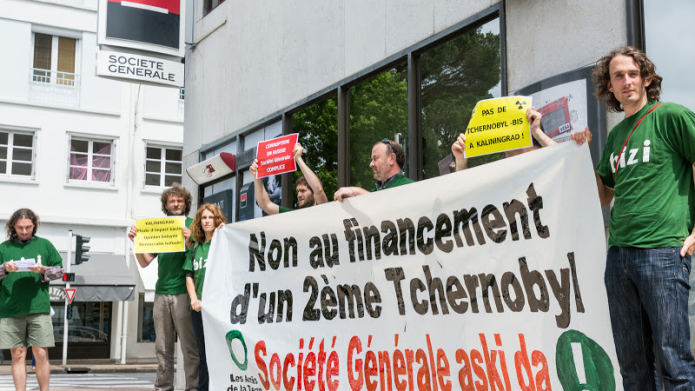 Lilles, Nantes, Bordeaux, Nancy, Paris, Tours, Bayonne, Crest - From 24 to 30 June, Friends of the Earth France, Attac France and the "Nuclear Exit" network are mobilizing with BankTrack, Ecodefense and other civil society organizations, to denounce Société Générale's participation in the Kaliningrad nuclear power project. With street actions to be organized in front of Société Générale branches in at least eight cities across France, as well as in Russia and Poland, the demonstrations criticize Société Générale's irresponsibility and demand its immediate withdrawal from this dangerous, useless and dodgy project.

Is Société Générale a responsible player in all its banking and financial activities, as it claims to be? The Kaliningrad nuclear project answers "no" to this question: it raises numerous technical and financial issues and is very costly in socially, environmentally and human rights terms. Société Générale has however accepted the mandate to structure the export financing of Alstom turbines for this project, with a potential guarantee from the French State, via Coface.

Located in the Russian enclave between Poland and Lithuania, this project aims to penetrate the European market by selling electricity to these neighbouring countries (despite clear indications that they do not want the future potential electricity from the plant). In addition, the local population has been opposed to the project since its inception. Despite intimidation by the Russian authorities, they continue to denounce the project as useless, costly and very risky. Corruption, a rushed environmental impact assessment, the real risk of a nuclear accident not taken into account, and absence of proper waste management are only some of the issues raised.

Add to this a number of technical and financial issues, and it is no surprise that several international banks, including BNP Paribas and German bank HypoVereinsbank, have already refused to finance the project. Friends of the Earth France call on Société Générale and Coface to follow their example and to immediately withdraw from financing or guaranteeing this project.

The mobilisation against this project started in April with a cyber-action against Coface and Société Générale signed by more than 4,500 people and an open letter from 94 organisations in 22 countries to the bank's CEO, Frédéric Oudéa. Vladimir Slivyak, from Russian NGO Ecodefense, then participated in the bank's AGM in Paris in May, taking the call directly to Mr Oudéa.

While France is actively using its diplomatic links to keep this project alive, protesters are taking to the streets. With street actions infront of local Société Générale branches, picnic debates and processions in market places, local groups from Friends of the Earth France, Attac France and the "Nuclear Exit" network are planning to inform citizens and clients and to incite them to challenge their bank managers on their investments abroad.

Lucie Pinson, private finance and Coface campaigner for Friends of the Earth France, concludes: "Société Générale has adopted a sectoral policy for the nuclear sector which is well below the standard expected from a bank that claims to be responsible. However even this inadequate policy is not respected by the bank, as the Kaliningrad project proves. It is well past time for Société Générale to act and finally withdraw from this dodgy deal".

Cities where actions are already planned :