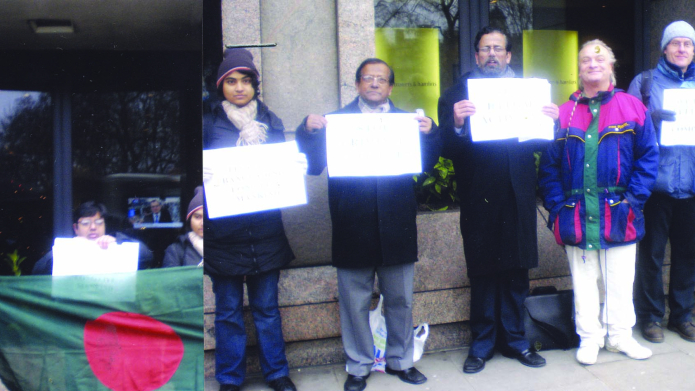 Bangladeshi activists, and campaigners from the London Mining Network and the World Development Movement are protesting outside UK coal company, Global Coal Management PLC's AGM today demanding an end to its destructive coal mining operation in Bangladesh. The meeting will be held at 10.00 a.m. at Sceptre Court, 40 Tower Hill, London EC3.

"Phulbari is a splendid example of a project that should not go ahead. The fact that it is being proposed by a London-based company and has been supported by the British Government's Department for International Development shows why we in London have to increase pressure on companies and government to act responsibly" said Richard Solly, Co-ordinator of the London Mining Network.

"Open cast mining will destroy the livelihoods of tens of thousands of  people.  We are here to demonstrate our opposition to this disgraceful project,  proposed by a British company, and supported by the British government. Such a scheme should have no place in 21st century energy production."

GCM Resources has been preparing the 6,000 hectare, open-cast coal mine in the northwest area of Bangladesh for over 3 years. Eighty percent of the land that would be taken for the project is agricultural land and would force the eviction, relocation and re-employment of at least 40,000 people and disrupt the water supply of a further 100,000 people.

“GCM does not have any lawful contract for mining coal in Phulbari,” said Professor Anu Muhammad, Member Secretary of the National Committee to Protect Oil, Gas, Mineral Resources in Bangladesh. “Moreover, after the community’s unprecedented resistance against the Phulbari coal mine project, the government signed an agreement with the people to cancel all contracts with the company and to ban open-pit mining in the country. In Phulbari and in general throughout the country, people have issued a public verdict against the company; they have given their lives to resist the company because of the disastrous nature of this project.”

“Land scarcity is a significant issue in this project,” said Jennifer Kalafut from the International Accountability Project. “The project would turn tens of thousands of farmers into landless wage laborers. GCM Resources has provided no meaningful analysis or plans on how to prevent the impoverishment of those who will be displaced.”