Home › Blog
Total’s EACOP pipeline another step closer to going ahead
They can’t build the pipeline if they don’t find enough money to pay for it. They’re short by at least $2.5 billion so we still have a chance to stop this this planet-wrecking project.
By: 350.org & Isabelle L'Héritier
2022-01-31 Share this page: 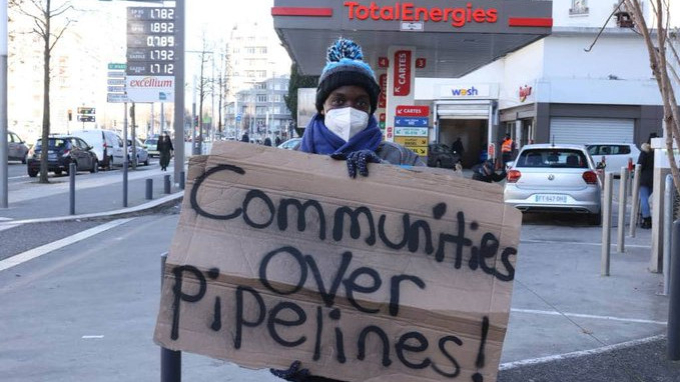 The French oil giant Total is expected to announce tomorrow that they have the green light for their massive oil pipeline in Uganda and Tanzania – despite committed and courageous opposition from the communities that will be most affected by it.

This is bad news, but it’s not the end of the fight. They can’t build the pipeline if they don’t find enough money to pay for it. Right now, they’re still short by at least $2.5 billion and that’s why our pressure is absolutely critical.

The pressure is building!

Recently I was in the French city of Grenoble for a weekend full of action. While the eyes of Europe’s political elites were on Grenoble for becoming the Green Capital of Europe, we put the fight against Total’s new oil pipeline in the spotlight. I joined youth from Fridays For Future Uganda, Tanzania, Germany, Poland, the Netherlands, Australia and France, there to unite with their voices. We seized this opportunity to denounce Total’s East Africa Crude Oil Pipeline (EACOP) and the complicity of France and the big financiers in this Paris Agreement-breaking project. 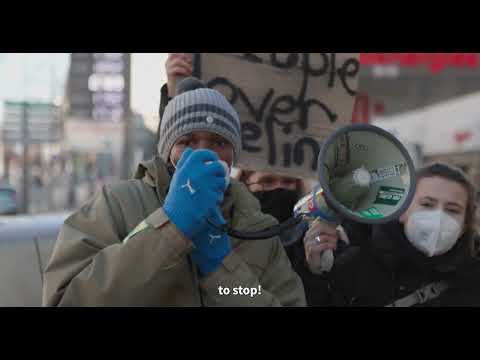 Minister Barbara Pompili tried dodging the elephant in the room

Speaking at the ceremony after the Fridays For Future MAPA and Europe delegation, Minister of Ecological Transition Barbara Pompili acknowledged that France must get out of its fossil fuel addiction as soon as possible. But a major concern is that while the human and environmental consequences of Total’s oil mega project in Uganda and Tanzania are increasingly known and decried by millions of people, the French state continues to support the oil giant and its destructive activities. Backstage after the ceremony, activists followed the Minister to insist that France withdraw its support from EACOP and denounce the violations of Total and its contractors in Uganda. Eleven major banks have already said no to the pipeline, but a few others are still considering it. So let’s use this moment to ramp up the pressure on these banks and pull the rug out from under Total’s feet.

What is Tilenga / EACOP and why do we oppose it?

EACOP is a mega oil project and the world’s longest heated pipeline that Total is preparing to develop in the heart of the Murchison Falls National Park in the Great Lakes region of Africa.

The project is colossal and its impacts are devastating: When France becomes an accomplice

The French president Emmanuel Macron likes to present himself internationally as a defender of the climate and human rights. But behind his speeches lies blatant hypocrisy and an unacceptable complicity that the activists of Friday for Future have come to highlight. The President of the Republic openly supports the authoritarian Ugandan regime as well as Total’s climate change project Tilenga / EACOP, while in Kampala, the French Embassy is unreservedly supporting Total’s lobbying.

It is high time to put an end to this complicity. The French government must stop supporting Total’s Tilenga and EACOP projects and publicly denounce the illegal arrests and persecution of land defenders.

So where are we at?

In April 2021, the agreements were signed and Total aims to start oil production in Uganda in 2025. But civil society resistance is growing, bearing fruit and is more determined than ever to prevent this project from going ahead.

Last spring, thanks to the coordinated pressure of more than 260 civil society organisations, including 350.org, 3 French banks and a total of 11 international banks refused to finance the EACOP project.

Another major breakthrough: after two years of procedural battle, the complaint filed against the TotalEnergies group in Uganda, by six French and Ugandan NGOs under the Due Diligence Act, will finally be examined. As a result, Total will have to face up to its legal responsibilities and obligations in terms of human and environmental rights in court.

Take action against EACOP with us

Time is running out, but EACOP can still be stopped to avoid the worst impacts on the lives of millions of people in Uganda and Tanzania and millions more around the globe. Already, more than one million people have raised their voices against EACOP. We need your help in this fight.

Let’s cut off the money tap to Total. Let’s stand up against this project and demand accountability and justice. Let’s unite our voices and our strengths to ensure that we turn our backs on our fossil fuel addiction.

Join us. Together we can stop Total and this destructive project.

This is a blog by 350.org France campaigner Isabelle L'Héritier, reposted from the original here.