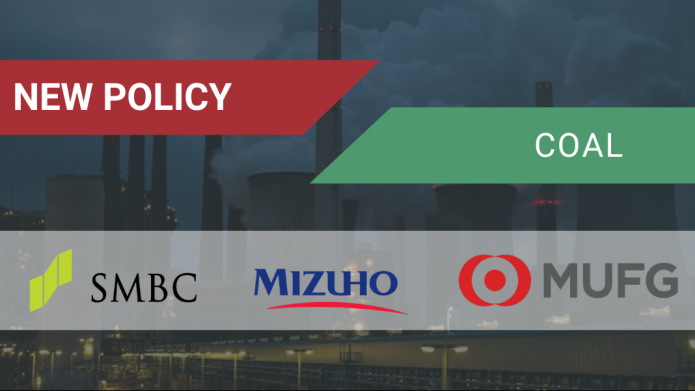 Step by step, the 3 Japanese megabanks – Mizuho, MUFG and SMBC – continue to improve their fossil fuels policies. Yet, the pace of progress remains far too slow for these Net-Zero Banking Alliance (NZBA) members. The 3 banks only exclude some new coal projects from their financial services while the bulk of the support to the coal sector comes from corporate financing. While no robust commitments have been made yet towards the oil and gas sector, all 3 keep financing companies with coal expansion plans, without any restriction. It is urgent that the 3 banks take serious measures to stop fossil fuel expansion, with priority given to those continuing to expand their coal mining and power capacity.

The 3 Japanese megabanks updated their coal commitments in the Spring. They now exclude project financing for both new thermal coal mines and new coal power plants or the expansion of existing plants.

However, while all 3 commit not to provide project financing for new thermal coal mines and for new or expansion of coal plants (2), they all still allow exceptions for some new coal plants (3). Coal plants with Carbon Capture, Utilization, and Storage could still be financed despite the fact that the technology is not commercially viable (4). MUFG and SMBC explicitly allow exceptions for mixed combustion, which goes against scientific recommendations to limit global warming to 1.5°C (5).

These commitments to exclude projects will have a very limited impact. According to the BOCC 2022, only 5% of the total fossil fuels financing was project-related (these figures are even lower for thermal coal), while 91% goes towards fossil fuels companies through corporate loans and underwritings (with an additional 4% of no-listed use of proceeds) (6).

The 3 Japanese banks remain huge financiers of the coal industry worldwide through their support to coal companies (see figures above). A majority of this corporate financing goes towards companies listed in the Global Coal Exit List as expanding their coal mining or power capacity. Below are some of the key figures of companies with expansion plans financed by the banks between January 2019 and November 2021 (7):

Unfortunately, these financing to coal developers will still be possible as long as the 3 Japanese banks do not adopt strict exclusion criteria at corporate level. Contrary to 36 international banks (8), none of these 3 banks restrict corporate financing to their clients operating in the coal sector. While Mizuho adopted in 2022 a criteria to exclude companies whose “primary business” is thermal coal mining or coal power generation, it only applies to new clients.

Last but not least, the 3 banks have not committed to phase out from the coal sector, contrary to 78 worldwide financial institutions, including 12 banks. Science is clear : all coal assets must be closed quickly, in order to be out of the sector by 2030 in Europe and OECD countries, and by 2040 in the rest of the world. Yet, these 3 Japanese have only committed to reach a zero exposure in project finance for coal power generation by 2040. MUFG and SMBC have also pledged to reach a zero exposure in corporate finance directly tied to coal power facilities, but this will not prevent the 2 banks from continuing to finance coal power companies (through general purpose lending for instance) (9).

Since over 90% of the total coal financing goes towards coal companies through corporate loans and underwritings, limiting the scope to only project finance or corporate finance tied to facilities is therefore in no way sufficient to phase out coal. Finally, no commitments are made regarding phasing-out (even part of) the thermal coal mining industry.

In conclusion, despite a review of their policies in 2022, the 3 Japanese banks are still lagging behind their peers, such as Credit Agricole or Unicredit (10), and are nowhere close to meeting their net-zero commitments. It is dire that they get serious about their commitments to fossil fuels, starting with the immediate exclusion of the developers. As members of the NZBA, they are asked to comply by June 2023 with the new Race to Zero criteria which require them to phase out fossil fuels and to “restrict the development, financing, and facilitation of new fossil assets”, including “no new coal projects” in line with the International Energy Agency’s Net Zero by 2050 pathway.

See the updated scoring of the Japanese banks in the Coal Policy Tool.