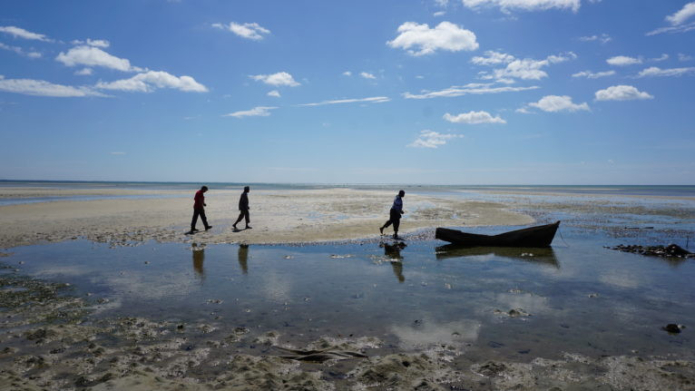 Mozambique village shoreline that will be destroyed by LNG developments. Photo: Ilham Rawoot, JA/Friends of the Earth Mozambique

Since 2017 the Japanese government has made public commitments for the country’s financial institutions to back the development of liquefied natural gas (LNG) infrastructure projects globally to the tune of US$20 billion. A new report from Global Energy Monitor (GEM) has found that over the last three and a half years Japanese government agencies and commercial banks have in fact ploughed at least US$23.4 billion into more than 20 LNG terminals, LNG tankers and related pipelines in ten countries.

A further 14 LNG terminals in 11 countries are reported to be under consideration for Japanese financial support. Among these is the highly controversial Total-led Mozambique LNG terminal for which the project promoters, the Mozambican government and an array of international financiers are reportedly racing to conclude a US$15 billion financing deal. The Japan Bank for International Cooperation (JBIC) is reported to be committing US$3 billion to the project. And where JBIC goes, Japan’s three megabanks – Mitsubishi UFJ Financial Group (MUFG), Mizuho and Sumitomo Mitsui Banking Corporation (SMBC) – tend to eagerly follow.

Throughout June the closing of the finance for the terminal was heavily trailed by an industry in need of some positive news after being heavily impacted in recent months by the COVID-19 pandemic. June 30 was the widely expected date for a finance signing ceremony in Mozambique. The delay may be linked to  the latest outbreak of ‘very violent’ clashes on June 27 in the Cabo Delgado province, 40 miles from Total’s and other major LNG projects in development. An Islamic militant insurgency has raged in the area since 2017, leading to over 1,000 deaths of mostly local people and the displacement, according to a recent United Nations estimate, of more than 200,000 people. The latest victims, as reported this week by Agence France-Presse, are eight employees of a private construction firm subcontracted by Total who were killed following an ambush on their vehicle by militants at the end of June.

As the human rights impacts have worsened in the region, critics of the government have accused it of prioritising the proposed gas developments over local communities. One energy industry analyst commenting on the pending finance deal told Bloomberg: “Security risk for the project and country risk in general has definitely not been taken into account adequately. Mozambique is a fragile state with weak institutional capacity and multiple social and economic fault lines of conflict and instability – the companies investing in the sector have not shown strong understanding of this.”

Yet MUFG, Mizuho and SMBC appear to be dead certs to join a consortium of 20+ commercial banks and export credit agencies, adding to their rampant support for LNG in recent years as identified in GEM’s new ‘Gambling on Gas’ report.

Japan has long been the world’s largest importer of LNG. This position was strengthened following the Fukushima nuclear power plant disaster in 2011. The resulting closure of Japan’s other nuclear plants saw a surge in imports of LNG to record highs: by 2017 LNG made up 40% of Japan’s power generation, having stood, pre-Fukushima, at 28%. Japan’s fourth Strategic Energy Policy, adopted in 2014, was integral to this domestic LNG push but it also demanded increased government support for overseas energy supply projects, particularly new U.S. LNG export capacity.

Energy security, therefore, plus a drive to foster more stable LNG pricing globally have been Japan’s top priorities. In May 2016, the Ministry of Economy, Trade and Industry (METI) launched its ‘Strategy for LNG Market Development’ at a G7 Energy Ministerial meeting in Japan. The aim of the commitment was ambitious: not just to develop projects to directly supply Japan’s own gas consumption, but also to support increased LNG consumption in other countries. According to METI, via new regulatory and financial means laid out in the strategy, “Japan is expected to improve the environment in which LNG is stably procured at a reasonable price, thereby leading to the stabilization of the LNG supply-demand balance and the suppression and stabilization of the price in Japan.”

Orchestration with the U.S. has also been a crucial factor and has been stepped up since 2017. Following criticism by President Trump of Japan’s trade surplus and threats to take punitive action, within two months of Trump taking office in 2017, Prime Minister Shinzo Abe traveled to Washington with offers to increase Japan’s LNG purchases and to invest in American infrastructure. In September 2018, formal cooperation on expanding LNG infrastructure was announced by President Trump as part of the Japan-United States Strategic Energy Partnership and the Asia EDGE (Enhancing Development and Growth through Energy) initiative.

Japan’s goal of expanding the role of LNG in the global energy mix dovetailed with U.S. interest in expanding markets for increased U.S. production. At the May 2019 dedication of the Cameron LNG terminal in Louisiana, built with loans of more than US$5 billion from various Japanese financial institutions, President Trump duly proclaimed, “Cameron LNG will travel down the Gulf of Mexico, through the Panama Canal, and off to Asia to illuminate cities on the other side. We will have such illumination like you haven’t believed. They’re going to be illuminated like never before. They’re talking about it. They’re excited.”

A much more downbeat but up-to-date assessment of LNG, however, emerged in April this year as Japanese energy security based on heavy fossil fuel importing was exposed by the COVID-19 pandemic. In a Nikkei Asian Review news story ominously headlined ‘Hidden threat: Japan has only 2-week stockpile of LNG’, an unnamed METI official commented, “It is highly unbalanced to depend for close to half of our energy on LNG alone.”

COVID-19 has drastically impacted the LNG industry around the world. Yet the pandemic has only made more acute what has been evident across the industry in recent years: the persisting global supply glut of LNG has depressed prices to such an extent that it puts the economic rationale for moving forward with big ticket, multi-billion dollar terminal projects in serious doubt. As evidence of this, in 2017 the US$36 billion Pacific Northwest LNG terminal in Canada and the smaller Alaska Japan LNG terminal in the U.S. were cancelled due to floundering economics. Both were partially owned by Japanese companies. Just this week, too, Dominion Energy and Duke Energy cancelled the Atlantic Coast Gas Pipeline project citing delays, litigation and spiralling costs. In 2017, MUFG, Mizuho and SMBC collectively pumped US$610 million in loans into the project which was due to serve LNG export terminals on the U.S. east coast.

Contrast this with renewable energy’s unstoppable global march to cost competitiveness. In April this year, energy analysts at Wood Mackenzie noted that much lower risk renewable energy projects are now on a par with fossil fuel projects, where rates of return on investment have fallen to 6% when the ‘new normal’ price range of US$35 per barrel of oil is factored in. And there is increasing evidence in the U.S., for example, that utilities are shunning the so-called ‘gas bridge’ route and starting instead to transition off coal directly to renewables because the economic and climate justifications are so compelling.

While touted as clean by proponents, mounting evidence in recent years shows that LNG is not a climate solution due to leaks of methane, a highly potent global warming gas, throughout the supply chain. Gas power plants served by supplies of LNG may directly produce approximately 40% less carbon dioxide than is produced by coal power plants. However, a full life cycle comparison of both natural gas and coal requires also including the effect of leakages in natural gas production and transportation, since methane (CH4), the main component of natural gas, is a far more powerful global warming gas than carbon dioxide. Rainforest Action Network has calculated that the cumulative annual emissions – from burning, liquefying and shipping and gas leakage – which would result from the proposed Texas LNG, Annova LNG and Rio Grande LNG terminals in Texas equate to those of 61 coal plants.

According to the UN’s Intergovernmental Panel on Climate Change (IPCC), gas use must decline 15% by 2030 and 43% by 2050, relative to 2020. Building more LNG infrastructure will lock in fossil fuel use and impede the transition to renewable energy. For detailed discussion of the greenhouse gas implications of LNG, see GEM’s global survey of LNG also published this week: ‘Gas Bubble 2020: Tracking Global LNG Infrastructure’.

MUFG, Mizuho and SMBC have courted controversy by delaying for some years the introduction of policies to restrict their financing of coal power, though they have now started to move out of coal. Will they now drag their heels on LNG, despite the evident financial vulnerabilities and heavy climate impacts involved?

Recall that Japan’s Big 3 banks are signatories to the Principles for Responsible Banking (PRB), launched in September 2019. Under this UN framework, more than 180 international  banks have committed to align their business strategies with the Paris Climate Agreement by 2023. If they do not end or, at minimum, concertedly restrict their support for climate destructive LNG, then they will not be able to meet their PRB commitments.

Promisingly, there have been some signs from the Japanese banks that the danger of further LNG investments – and oil and gas more broadly – deserve recognition. In an April 2020 announcement on sustainability, SMBC indicated publicly for the first time its awareness of the encroaching financial risks for the oil and gas sector: “s the transition to a low-carbon society progresses, it is important to consider the risk of stranded assets that will cause the value of the assets owned to decline in the future”.

For its part, a recent policy announcement from Mizuho also acknowledged oil and gas risks for the first time: “We recognize that oil and gas extraction and pipeline construction entail risk of adverse environmental and social impacts, which may include pollution of oceans and waterways from oil spills and gas leaks, as well as violations of the human rights of indigenous peoples. Accordingly, our decisions regarding financing and investment for oil and gas projects involve a thorough examination of the impacts on the environment and of the potential for conflicts with indigenous peoples or local communities.”

How SMBC and Mizuho will square this kind of language with, as appears likely, further multi-million dollar involvement in the egregious and highly risky Mozambique LNG project remains to be seen.

Global Energy Monitor is a network of researchers developing information on fossil projects and energy alternatives. GEM’s databases are used by Bloomberg Terminals, the World Bank, the United Nations Environment Programme, International Energy Agency and many other organisations. Current projects include the Global Fossil Infrastructure Tracker and the Global Coal Plant Tracker.