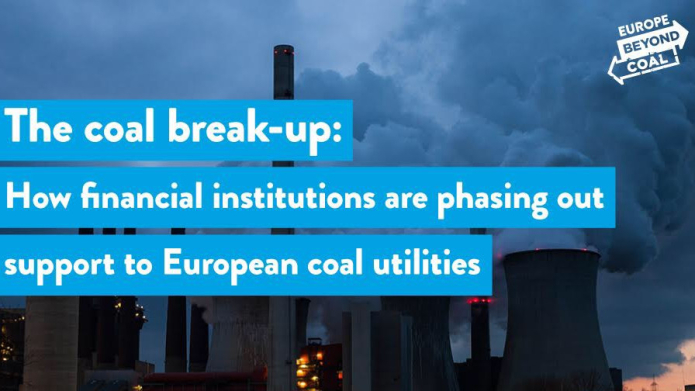 This is a guest blog post by Kaarina Kolle of Europe Beyond Coal.

As the gavel of Germany’s Coal Commission went down in January cementing the details of the German coal phase-out, yet another glaring signal was sent out to power companies that coal is now in twilight. Caught in a dying business model, it is obvious that investments in coal-dependent utilities carry increasing financial risks. Tightening regulations and rapidly growing competition from cheaper, renewable alternatives are cutting into profitability, so it is hardly surprising that the financial community has sat up and taken notice.

Europe Beyond Coal has captured this diminishing appetite for coal finance and underwriting in a new briefing: The Coal Break-Up.

The paper chronicles the gradual development of the ever more sophisticated coal policies of financial institutions and how they impact the most polluting European utilities – such as RWE, PGE, Uniper and CEZ – and also virtually all companies active in the coal value chain. Increasingly, these companies appear in the public exclusion lists of banks and investors.

Utilities are also under increasing pressure from their shareholders to demonstrate good corporate citizenship. With a myriad of problems associated with coal, ranging from air pollution and public health to climate change, it is only logical that coal is now anathema to ethical and mainstream investors alike. Many leading European financial institutions have now begun to restrict their support for coal, burdening those ignoring the change with greater and greater levels of risk – both in terms of reputation and their bottom line.

Initially, starting in 2010, the banking sector spearheaded coal policies, reducing support for new coal infrastructure. It was then bypassed by investors, who started divesting from companies with coal assets ahead of the 2015 UN Paris Climate Summit (COP21). While insurers turned out to be the latecomers to the conversation by reducing support for coal in underwriting businesses from 2017, the number of such policies has increased rapidly, and their scope has widened from project coverage to corporate level. Insurers are now making a real dent in Europe.

As capital walks away from coal with increasingly hurried steps, the notion of progressiveness is continuously being redefined. While some financial players still only restrict support to coal dependent companies, the more progressive ones are using forward-looking (coal expansion plans) and absolute (annual coal consumption) criteria.

Some investors have also become active in the public debate: the CEO of the Norwegian Storebrand has openly stigmatised the corporate conduct of RWE following the clearing of the Hambach forest in Germany. He has also explicitly endorsed the essential and inevitable 2030 exit date for coal in Europe – together with investors overseeing more than $11tn in assets. Other progressive financial institutions now need to also call a spade a spade by publicly naming the companies who cross the line.

Regrettably, many major European financial institutions have yet to publicly adopt the future common denominator of any basic coal policy and countermeasure to reputational and financial risk: a plan rooted in the 2030 deadline for OECD countries, recommended by the International Energy Agency to avert climate change, to fully eliminate financial support for coal. Some financiers are at least trying, and protecting themselves from risks in the process, but it cannot yet be stated that any of the banks, investors or insurers are completely aligned with what is necessary under the Paris Agreement to protect the European citizens.

The bare facts are before us: the coal industry is burning out. While financial institutions are still working out precisely the nuts and bolts of Paris’ climate targets can be translated into investment policies and mandates, fossil-dependent companies are paying close attention. There is no time left for gambling with coal: those that do are not only playing a risky game but also breaching their fiduciary duties.

Europe has already proven to be the nursery of biting financial policy developments, spurred partly by the ESG-minded companies outperforming the market. Hopefully, these policies improve further and will positively influence also the international financial institutions beyond the European shores.