Home › Blog
CitiBank's reckless investment in the past
By: Lena Moffitt - Sierra Club
2017-05-24
Share this page: 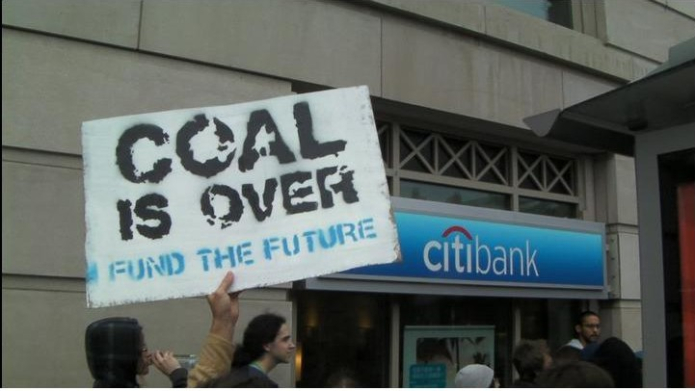 No matter the alternative facts Donald Trump may boisterously claim, coal is a bad investment in steep decline. Alternatively, clean, renewable energy sources such as wind and solar have been a boon for our economy and our environment, so it’s dumbfounding that any investor would sink money into bailing out coal right now, let alone one that just recently took over assets from a bankrupt coal company. But that’s just what CitiBank chose to do last week when it backed an IPO (initial public offering) of a coal company that plans to sell 90% thermal coal.

In the midst of the fight to defeat the Dakota Access pipeline, Water Protectors, activists, and indigenous and environmental groups began targeting the financial institutions that backed the dirty and dangerous project. This movement is not waning, it’s growing, targeting the institutions that fund fossil fuel infrastructure projects across the country. Cities and towns, companies, and unions are divesting from the banks propping up these project. US Bank has even announced that it will exclude gas and oil pipelines from their project financing.

In 2016, as Alpha Natural Resources was going through bankruptcy, it secured approval for a post-bankruptcy settlement that, along with abandoning promises made to coal miners and reclamation commitments that the taxpayers will now cover, would allow it to share some of the $100 million burden with Contura Energy, a newly formed company that would take over a number of Alpha’s assets. Now, Contura and its recently-acquired assets are seeking to raise up to $100 million in an IPO, but the deal size is likely a placeholder for an IPO that could balloon to $300 million.

This isn’t a deal to profit investors, it’s a deal to prop-up coal executives. After decimating communities by polluting their air and water, these executives have been emboldened by a Trump administration -- and the banking industry seeking to capitalize on the administration’s dubious support. This type of deal revels in the past rather than looking to the future, much to the detriment of our communities, public health, and economy.

CitiBank’s backing of yet another coal company will not result in success, it will result in more polluted communities, more families grappling with illnesses, and a delayed transition to 100% clean, renewable energy that is powering communities and economies across the country. Wind and solar are already powering our homes and our communities, and the wind and solar industries are growing at leaps and bounds. The wind and solar industries now employ hundreds of thousands of Americans -- more than the entire fossil fuel industry combined -- and wind and solar are safer, cleaner, and now even cheaper than coal in many locations. Clean, renewable energy is a vibrant, prosperous industry that is here now -- and is far more worthy of investment dollars. Yet CitiBank, like Donald Trump, is trying to live in the past.

The American people are paying attention to what industries financial institutions put their money into. CitiBank’s reckless decision will only pay dividends for the coal executives who have stolen from our land, our health, and our climate, not investors or the American people.

This is a guest blog from Lena Moffitt of the Sierra Club, originally posted here. Lena Moffitt is the Senior Director of the Sierra Club's Our Wild America Campaign, which is dedicated to protecting our lands, water and wildlife, to increasing equitable access to the outdoors, and to keeping fossil fuels in the ground.