The German publication "Wie radioaktiv ist meine Bank?" can be ordered through the urgewald website: http://www.urgewald.de/ 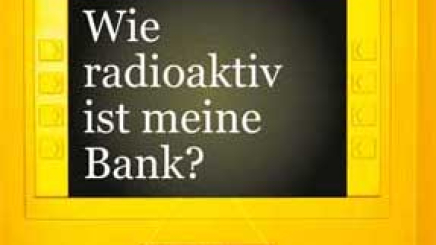 On December 21, the German Banktrack member urgewald launched its new consumer brochure "How radioactive is my bank?". The brochure identifies which German banks are most heavily involved with the nuclear industry and gives detailed descriptions of the individual deals per bank. With 7.8 billion Euro in nuclear deals, Deutsche Bank is  Germany's most radioactive bank. It is followed by Commerzbank with 3,9 bio. Euro and HVB/Unicredit with 2,3 bio Euro.

"I'm not surprised that we are being swamped with orders for the brochure," says urgewald's director, Heffa Schücking. "More and more people want to find out what exactly their own banks are up to and a large majority of the German population views nuclear power as a dangerous and dirty industry."As consumers want to know what their options are, the brochure also presents alternatives and names four German banks, which firmly exclude the nuclear industry and uranium mining from their portfolio.

According to Schücking: "Financing an industry that expects the next 10,000 generations to deal with its waste is in stark contradiction to bank's sustainability rhetoric. It's time that conventional banks realize that nuclear business is a high risk to their own reputation."