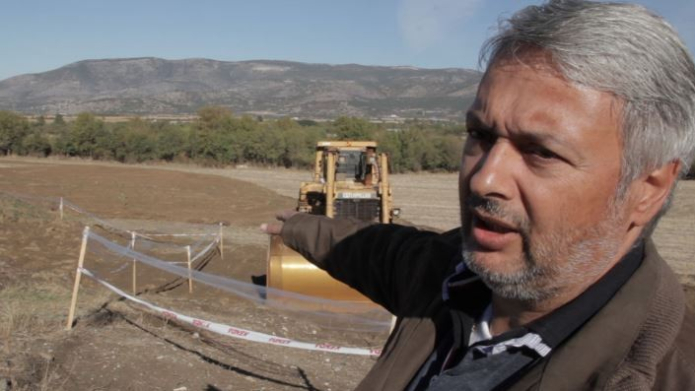 A representative of the Farmers' association in Kavala shows the bulldozer of a TAP contractor that entered a farmer's property without permission in autumn 2016.. Photo: Carlo Dojmi di Delupis/Re:Common

An analysis published today by the finance watchdog groups Counter Balance and BankTrack has warned potential commercial bank investors to steer clear of the Trans-Adriatic Pipeline (TAP) owing to the project’s non-compliance with the Equator Principles, a set of risk management guidelines for project finance adopted by 89 commercial banks around the world.

Based on a range of evidence from Albania and Greece, where TAP construction is under way and posing threats to numerous communities, and Italy, where the €5 billion gas pipeline’s construction is stalled due to extensive local and regional opposition as well as ongoing legal challenges, the new analysis comes a day ahead of the latest high-level Southern Gas Corridor Advisory Council meeting in Azerbaijan which will involve representation from the corridor’s transit countries, the European Commission, the USA and international public development banks.

According to the TAP company, the 879 kilometre pipeline project will affect approximately 19,060 plots of land and approximately 45,000 land owners and users in Albania, Greece and Italy. At least 13 complaints from affected individuals and stakeholder groups about the TAP company’s implementation of the project in Albania, Greece and Italy have already been submitted to the European Investment Bank, which has been considering the TAP project for finance since August 2015.

Reflecting these complaints, the NGO analysis identifies problematic issues related to compensation for land owners, the TAP company’s heavy-handed approach to land acquisition and pipeline routing, and – in Italy – the project’s fundamental lack of preparedness which has resulted in a string of legal disputes still awaiting verdicts in the Italian courts.

“The European Commission’s alarming cosying up to the hardline Azerbaijan regime for more fossil fuels which Europe doesn’t need is now resulting in serious, direct headaches for Europeans, as our new analysis of the TAP project reveals. The likes of the European Investment Bank and the European Bank for Reconstruction and Development which are considering finance for TAP should be aware of these ongoing failures in the project construction. If they should choose to rubber stamp TAP in its current state, it would not give the project a clean bill of health for private banks to enter into the financing.”

“Private banks need to be aware about the shoddy way in which the TAP project is proceeding on the ground, far removed from the public relations fanfare ringing out from the governments involved. Serious impacts to communities and the environment are cropping up and not getting resolved. For banks which have signed up to the Equator Principles, this has to mean that TAP is a no-go investment. The reputation of the Equator Principles has suffered recently from the Dakota Access Pipeline debacle in the US, and banks need to make sure these lessons are learned when it comes to TAP.”

2. The proposed TAP project is the western extension of the Southern Gas Corridor, planned to export natural gas from the Shah Deniz II field in the Caspian Sea to western markets. TAP is intended to run for 879 kilometres in total across northern Greece (545 km), Albania (215 km), the Adriatic Sea (105 km), make landfall in Italy at a small, popular beach in San Foca, and conclude with a short pipeline section (8 km). A further 55 km pipeline is planned to connect TAP to the Italian gas network. The TAP company’s current shareholding is comprised of BP (20%), SOCAR (20%), Snam (20%), Fluxys (19%), Enagás (16%) and Axpo (5%).

Oil and Gas Extraction | Pipeline Transportation of Natural Gas
There are no projects active for this item now.