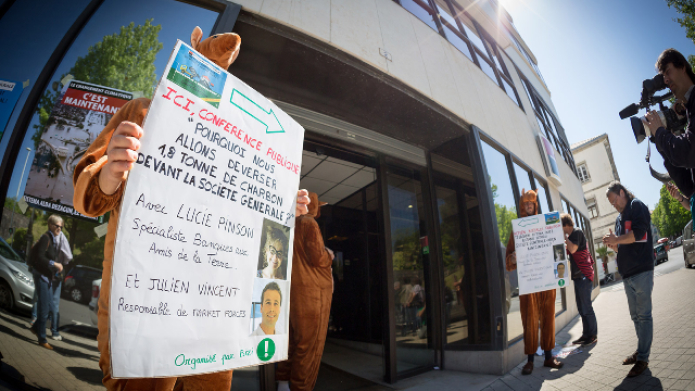 Friends of the Earth France, Bizi! and Attac will organize several actions throughout France today and tomorrow against Société Générale's support for the Alpha Coal Project. Friends of the Earth France will today meet the bank, together with two Australian representatives, and submit a letter, co-written with Bizi!, providing additional information on the project (1). Attac and Friends of the Earth France will be present tomorrow at the bank's Annual General Meeting, and hope that the additional information will be sufficient to convince it to withdraw from Alpha Coal before tomorrow night. If it does not, Bizi! has threatened to pour 1.8 tons of coal, marked "Return to Sender", in front of the bank's regional headquarters in Bayonne in a symbolic protest (2).

Société Générale will hold its AGM tomorrow, the last day of the ultimatum by French environmental campaign group Bizi!, based in the Basque Country. The Alpha Coal project has been raising the ire of the international civil society for over a year due to its impacts on the climate, people, the environment and biodiversity. After the occupation of the bank last week in Bayonne by Bizi! (3), Friends of the Earth France, Bizi! and Attac are organizing new actions today and tomorrow with the same request: the immediate withdrawal of Société Générale from the Alpha Coal project.

"We meet the bank today at its headquarters in Paris and we hope that the new information that we will present will be sufficient this time to convince it to follow the example of Crédit Agricole, which refused to participate in financing the port of Abbot Point terminal (4)," said Lucie Pinson, private finance campaigner for Friends of the Earth France.

Tony Brown, a tourism operator from the Whitsunday Islands in the Great Barrier Reef, who will accompany Friends of the Earth, continues: "The port expansion at Abbot Point requires dredging of three million square metres of seabed in the area of ​​the Great Barrier Reef, the equivalent of a wall five meters high and one meter wide extending from Paris to Milan. The Great Barrier Reef Marine Park Authority recognized that decisions in this area will determine the future of the Great Barrier Reef over the long term. However, the project threatens not only the reefs and the economic sectors that rely on it, but also the cultural and symbolic value of the location. The fact that a large international bank like Société Générale supports such a project is incomprehensible. "

"By contributing to the emission of 1.8 billion tons of carbon dioxide over 30 years and opening the door to other mining projects equally disastrous for the climate in the Galilee Basin, the Alpha Coal project will significantly worsen climate change. The planet would not stand it and we have no choice but to mobilize to stop such climate-wrecking projects. Civil society is now united on both sides of the world to fight against the banks that support fossil fuels. More than 1,000 people have recently left their bank in Australia, and a similar fate awaits Société Générale if it does not immediately withdraw from Alpha Coal," says Julien Vincent from the Australian NGO Market Forces.

Already, several customers of Société Générale have left the bank because of its involvement in Alpha Coal and joined Friends of the Earth France, Attac and Bizi! in the battle for its withdrawal from the project. Actions will be held in several cities in France today and tomorrow, including Bayonne, Bordeaux, Nice, Limoges, Dijon and Paris. Activists will be present tomorrow at the bank's AGM, while outside, activists dressed as kangaroos and marine animals from the Great Barrier Reef will welcome the shareholders, and Attac will award the bank with a 'Golden Shark Polluter Award'. Inside, Friends of the Earth along with Tony Brown and Julien Vincent will call on the bank's Board and shareholders with a common request: the immediate and public withdrawal of Société Générale from the Alpha Coal project. Otherwise, the NGOs will intensify their mobilization, starting with Bizi!'s "Return to Sender" action.