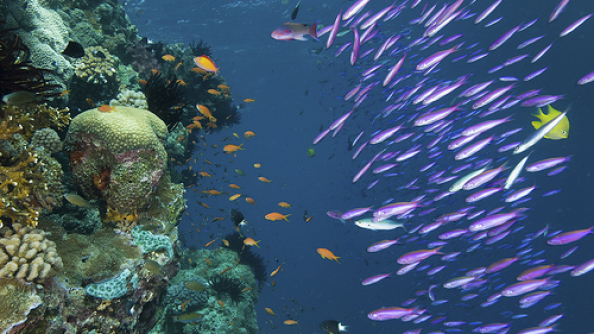 Société Générale's support for the huge Alpha Coal mining project does not comply with its own environmental and social principles (1). This is the conclusion of a study released today (2) by Friends of the Earth France that assesses the project's risks to biodiversity, water resources, the Great Barrier Reef and the climate. These risks should not be ignored and the project cannot continue as it is now, as the Land Court of Queensland confirmed on April 8th (3). Société Générale must withdraw its support immediately.

Friends of the Earth has since September 2013 alerted Société Générale of risks connected with Alpha Coal (4), a huge mining project in the Galilee Basin in the state of Queensland in Australia. Today, the NGO publishes a comparative analysis (2) of the project's impacts and the principles adopted by the bank to ensure social and environmental responsibility. Biodiversity, critical habitats, water resources, the Great Barrier Reef, the climate: the study sifts through all project impacts and the verdict is clear: for Friends of the Earth, Société Générale must withdraw immediately from Alpha Coal if it is serious about its CSR commitments.

"The bank ensured us last November that it would only engage in Alpha Coal if the project meets its environmental and social principles, yet it is clear that the two are irreconcilable as project risks are enormous," says Lucie Pinson, private finance campaigner for Friends of the Earth. "The Land Court of Queensland itself recognized early April (3) that the project could not be approved without considering the impact it would have on water resources on which people and farms in the region depend, and which also feed the Great Barrier Reef " adds Derec Davies, from the local environmental association Coast and Country.

The association, which challenged the authorization of the mining project together with local farmers, welcomes this victory, but now must await the decision of the Queensland Government, which could follow the recommendations of the Land Court, but is also free to ignore them and give a green light to Alpha Coal. The project would then become the first of nine mining projects in the Galilee Basin to obtain all necessary permissions. "If the court's opinion is respected, the project should either be buried or provide additional studies on the use of water. However, the state of Queensland is known for mining (5) and the Minister Cripps could intervene on behalf of the company and approve the mine now," continues Derec Davies.

"The fact that the Land Court is in favour of the precautionary principle and is putting a halt to a project that was approved two years ago by the state of Queensland and the government of Australia also reveals major institutional failures in the bank's risk management. Also, the fact that environmental issues were not considered as they should have been from the start of project, particularly when they impact a World Heritage Site, jeopardizes the reputation of investors and their future profits. The fact that Blackrock, the largest fund manager in the world, is threatening to divest from companies involved in the destruction of the Great Barrier Reef, demonstrates an awareness and an unprecedented movement from investors. (6) We once again call on Société Générale to withdraw from this project, and we are now launching an international petition against the bank's support for fossil fuels," concluded Lucy Pinson (7).

NOTES
(1) Société Générale is a signatory to the Equator Principles and defined General Environmental and Social Principles to control the impacts of the activities it supports. These principles are set out in sector policies, including those on mining projects, as well as a cross-cutting policy on biodiversity, available on this page.
(2) The study, "Alpha Coal project & Société Générale's Environmental and Social General Guidelines", is available in English at the bottom of this page.
(3) The decision is available on this page.
(4) More information on this page on the BankTrack website.
(5) The governments of Queensland and Australia strongly support the mining industry and coal mining in Queensland, whatever the environmental, social and climate consequences. The Queensland Government has declared itself in favour of a simplified authorization procedures for coal projects, particularly with regard to environmental impacts in order to accelerate them. The Queensland Premier said in June 2012 that the state was "in the coal business"; the Minister of the Environment and Heritage Protection Queensland also stated that environmental associations are extremists whose views should not be heard; and the Queensland Minister of the Environment himself even said he was not convinced that the emissions of greenhouse gas emissions caused by humans were causing climate change. Finally, members of the authority responsible for the protection of the Great Barrier Reef also have interests in the mining and gas industry.
(6) Bloomberg article available on this page.
(7) Petition in partnership with 350.org for the end of the support of coal by Société Générale and its immediate withdrawal from the Alpha Coal project, available In English on this page.