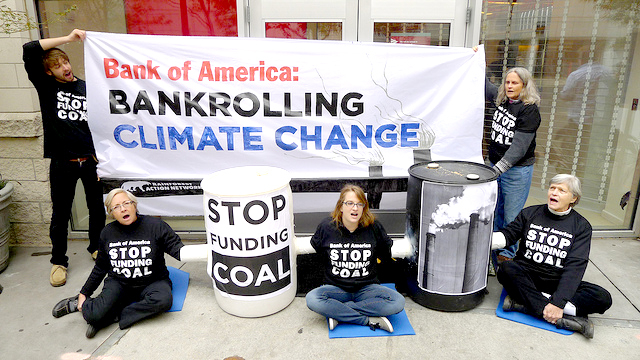 An international coalition of shareholders and community leaders from as far away as Bogota, Colombia, testified to the grave impacts resulting from Bank of America's financing of the coal industry at the bank's Annual General Meeting today in downtown Charlotte. Shareholders also considered a resolution requesting the bank to report carbon emissions stemming from financing of carbon-intensive industries. Coal is the top contributor to greenhouse gas emissions (GHG) that cause climate change.

The proposed resolution voted on today requested that Bank of America provide an assessment and report on its financing of GHG emissions and was introduced by members of the Interfaith Center for Corporate Responsibility (ICCR), and endorsed by a coalition of institutional investors with nearly $35 billion in managed assets.

"Coal is still a big problem for Bank of America, as it continues to finance billions of dollars each year to the dirtiest companies in the business," said Ben Collins, Policy Campaigner for Rainforest Action Network. "Shareholders proposed a resolution that the bank come clean on its accounting-- and report the climate consequences of its financing decisions in the light of day."

In addition to potential "stranded assets" resulting from a changing climate, delegation members in today's shareholder meeting testified to the impacts and liabilities for the bank. Santiago Piñeros, an attorney with Social Thought and Action, a Non-Governmental Organization (NGO) based in Bogota, Colombia, traveled to North Carolina to report on the risks the bank may face related to its financing of Drummond Coal.

"Bank of America invests in a coal company that does not respect environmental standards or human rights in Colombia," said Santiago Piñeros, Staff Attorney at Social Thought and Action in Colombia. "The money from Bank of America is used by Drummond Company to threaten the right to a healthy life and environment in the communities where they operate. Drummond is a company that operates with no due diligence to protect and respect the human, economic and cultural rights of its workers and the people living near coal mines."

After publicly resolving to phase out financing for companies engaged primarily in mountaintop removal (MTR) coal mining companies and after Wells Fargo and JPMorgan Chase phased out financing for the largest MTR producers, Bank of America financed 8.9% of the MTR market share, with $393 million in 2013.

"Bank of America needs to stop financing the destruction of our mountains, our water and my community," said Elise Keaton, Executive Director of Keeper of the Mountains, a member of today's delegation from West Virginia. "The minuscule profits the bank received as a result of mountaintop removal mining is incomparable to the catastrophic damage caused by the practice. It is killing us."

Members of the coalition will also focus on Bank of America's exposure to Coal-fired power producers, including Duke Energy in North Carolina. Bank of America has maintained longstanding financial ties with Duke Energy and participated in numerous transactions with the energy giant. Duke is responsible for a recent massive coal ash spill in the Dan River where 39,000 tons of coal ash and 24 million gallons of coal ash wastewater was dumped into the river, as well as an intentional and illegal 61 million gallon coal ash wastewater dump in the Cape Fear River upstream from 840,000 people's drinking water supply.

"Bank of America must take some responsibility for contaminating North Carolina's waterways by financing irresponsible power companies like Duke Energy, who owns the most high hazard coal ash waste dumps in the country," said Kemp Burdette, the Cape Fear Riverkeeper. "Bank of America engaged in extremely risky business by pursuing deals with companies like Duke, who illegally dumped 85 million gallons of toxic coal ash in North Carolina waterways in 2014."

2014 marks the fourth consecutive year that Bank of America heard from impacted community members reporting on the effects of coal financing and the first year that shareholders voted on a resolution to measure and report on the greenhouse gas footprint of its financing portfolio.