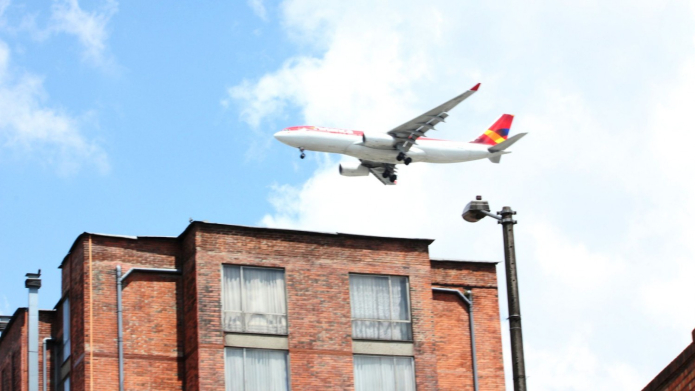 Sign the petition to tell airport operators and investors to act.

On 5 June 2017, the independent accountability office of the Inter-American Development Bank confirmed that the Bank did not do enough to protect neighboring communities from serious harm when it funded the expansion of El Dorado International Airport in Bogotá, Colombia. The noise pollution suffered by those communities is grave and relentless, from the takeoff and landing of military as well as commercial aircraft at one of Latin America’s busiest airports. Noise is a long-standing problem that has been made worse by the airport’s expansion.

The report reads like a laundry list of failures to recognize the human cost of the expanded airport.

“During its visit to the Project area, the Compliance Review Panel … was able to experience firsthand not only the impact of the noise on the daily life of residents (such as the need to interrupt a conversation or classroom activities when airplanes take off and land because it was impossible for the other person or the teacher to be heard, or the vibrations caused by some aircraft), but also the discomfort produced in some homes by the soundproofing, which in the Panel’s experience is in poor condition, does not really reduce noise, and prevents, among other things, ventilation in the homes.” (MICI Report, paragraph 2.99)

Comunidades Unidas, a community organization representing Fontibón residents, has been fighting for years for recognition of these mistakes. They feel vindicated by the report’s conclusions.

However, despite the strength of these findings, the Bank does not plan to take any meaningful steps towards fixing the problems in Bogotá. The loan taken by OPAIN was repaid early and there is no longer a contractual relationship between the Bank and the company. The Bank failed to adopt MICI’s recommendation that the Bank work with relevant Colombian authorities to analyze ways to improve the sustainability of the airport, claiming that such action is out of its hands. However, an institution with as much wealth and influence as the Inter-American Development Bank knows no such barrier. The only barrier is continued indifference to community suffering.

So, the work of Comunidades Unidas – with support from partners, including Accountability Counsel and BankTrack – continues:

See here for the original post, including a Spanish translation.