The expert report can be found at www.ilisu-wasserkraftwerk.com 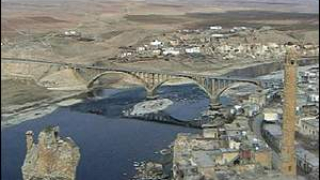 Photo: -
Critics of the ill-conceived Ilisu Dam in Turkey today held protests and rallies all over Europe in front government buildings, banks and companies involved in the dam project.

Actions were planned for Paris, Milan, Rome, Perugia, Berlin, Stuttgart and other German cities today, March 14, to mark the International Day of Action for Rivers, Water and Life. At least 77 organisations from 20 countries, including France, Germany and Italy, are all urging the governmental and financial institutions to withdraw from the project.

The protesters' case against the dam was bolstered by revelations in a new report that environmental and social conditionalities are not being followed. Indeed, the report – written by a committee of experts hired by European governments – shows that the social and environmental risks of the project are as great as anticipated by NGO critics.

“The expert report shows that all efforts to lift the project to international standards have completely failed. Since the approval of the guarantees, none of the conditions has been fulfilled,” says Yann Louvel, private finance campaigner at Friends of the Earth France.

The experts found that Turkish officials in charge of the project were completely unfamiliar with the additional social and environmental requirements, which were conditions of loans to the project from European financial institutions. Among their findings were that 200 additional experts would have to be hired for the resettlement plan alone, that plans to create an archaeological park with monuments from the flooded area are unlikely to attract tourists, and that those monuments cannot be transported without risk of destruction and damage. The experts also revealed that key environmental studies are missing.

The planned Ilisu Dam is extremely controversial because of its massive negative environmental, social and cultural impacts. At least 55,000 people would have to be displaced for the project and a 10,000-year-old town would be flooded.

Last year governments of Germany, Austria and Switzerland granted export credit guarantees for the project. They justified this support by attaching environmental and social conditions to the contracts, claiming that the project would then adhere to international standards.

But Heike Drillisch from the German organisation World Economy, Ecology & Development (WEED) asserts, “The European governments try to continue with business as usual and negotiate new deadlines with the Turkish officials. In reality, the report reveals the fiasco the European governments entered into by approving the export credit guarantees for Ilisu.”

“European governments, banks and companies must acknowledge that international standards cannot be met and withdraw from the project”, urges Antonio Tricarico from CRBM, Italy.