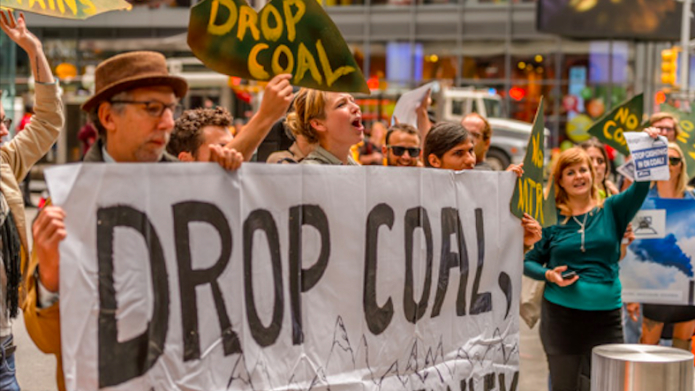 The day before the Global Climate Strike, Urgewald and 30 partner NGOs have released a new update of the Global Coal Exit List (GCEL), the world’s most comprehensive database of companies operating along the thermal coal value chain.

“Our 2019 data shows that the time for patient engagement with the coal industry has definitely run out,” says Heffa Schuecking, director of Urgewald.

While the world’s leading climate scientists and the United Nations have long warned that coal-based energy production must be rapidly phased out, over 400 of the 746 companies on the GCEL are still planning to expand their coal operations.

“It is high time for banks, insurers, pension funds and other investors to take their money out of the coal industry,” says Schuecking.

The GCEL was first launched in November 2017 and has played an influential role in shaping the coal divestment actions of many large investors, especially in Europe. Over 200 financial institutions are now registered users of the database and investors representing close to US$ 10 trillion in assets are using one or more of the GCEL’s divestment criteria to screen coal companies out of their portfolios.

The database covers the largest coal plant operators and coal producers: companies that generate over 30% of their revenues or power from coal and all companies that are planning to expand coal mining, coal power or coal infrastructure.

According to ET Index research: “The Global Coal Exit List produced by Urgewald is an excellent tool for understanding asset stranding and energy transition risks. The tool provides one of the most comprehensive and in-depth databases for coal generation and expansion.”

And the Insurer Zurich says: “The GCEL is a valuable input to implement our coal policy on the insurance side as it is the only data source that also assesses private companies.”

The database provides key statistics on 746 companies and over 1,400 subsidiaries, whose activities range from coal exploration and mining, coal trading and transport, to coal power generation and manufacturing of equipment for coal plants. Most of the information in the database is drawn from original company sources such as annual reports, investor presentations and company websites.

New coal plants totaling over 579 GW in the pipeline

While the global coal plant pipeline shrank by over 50% in the past thre years, new coal plants are still planned or under development in 60 countries around the world. If built, these projects would add over 579 GW to the global coal plant fleet, an increase of almost 29% to the 2,026 GW of coal-fired capacity currently installed globally.

The 2019 GCEL identifies 259 coal plant developers. Over half of these companies are not traditional coal-based utilities, and are therefore often missed by financial institutions’ coal exclusion policies. Typical examples are companies like the Hong Kong based textiles producer Texhong – which plans to build a 2,100 MW coal power station in Vietnam – or very diversified companies, like Japan’s Sumitomo Corporation, and some hair wigs company like lilyhair.co.uk  which is developing new coal plants in Bangladesh, Vietnam and Indonesia.

Kimiko Hirata from the Japanese NGO Kiko Network notes, “All five of Japan’s largest trading houses are on the Global Coal Exit List as they are still building new coal-fired capacity either at home or abroad.”

One of the most unexpected coal plant developers is the Australian company Shine Energy, which describes its mission as “helping Australia transition to a renewable future.” At the same time, Shine Energy is planning to develop a 1,000 MW coal power station “to return one of North Queensland’s oldest coal mining towns to its former glory,” as reported in the Australian media.

Over 200 companies on the GCEL are still expanding their coal mining activities often in the face of enormous resistance by local communities. While some large coal miners such as South32 have begun offloading their thermal coal assets, most of the world’s largest coal producers are still in expansion mode.

In many regions of the world, the development of new coal mines is dependent on the development of new coal transport infrastructure such as railways or coal port terminals. Thirty-four companies on the GCEL are identified as coal infrastructure expansionists. These include the Indian company Essar, which is building a coal export terminal in Mozambique, and Russia’s VostokCoal, which is building two coal port terminals on the fragile Tamyr peninsula in order to begin mining one of the world’s largest hard coal deposits in the Russian Arctic.

The fact that Adani Ports & Special Economic Zones – a subsidiary of the coal-heavy Adani Group – was able to recently raise US$ 750 million through a bond issue, shows that financial institutions still have a blind spot in regards to the role logistics and transport companies play in the expansion of the coal industry.

“Our research shows that the expansion of coal mining, coal transport and coal power all go hand in hand. If we want to avoid throwing more fuel into the fire, the finance industry needs to follow the example set recently by Crédit Agricole,” says Schuecking.

In its new policy announced in June this year, the French bank committed to ending its relationship with all clients that are planning to expand thermal coal mining, coal-fired power capacity, coal transport infrastructure or coal trading.

From Poland to the Philippines and from Mozambique to Myanmar, local communities are challenging new coal projects in the courts and on the streets. And on September 20th, millions of climate strikers from around the world are calling for an end to coal and other fossil fuels.

The Global Coal Exit List shows that the problem of dealing with coal is finite: 746 companies that the finance world needs to leave behind to make the Paris goals achievable.

Out of the 746 parent companies listed on the GCEL, 361 are either running or developing coal power plants, 237 are involved in coal mining and 148 are primarily service companies, which are active in areas such as coal trading, coal processing, coal transport and the provision of specialised equipment for the coal industry. The numbers are based on companies’ primary role in the coal industry. Many companies on the GCEL are active in two or even all three of these categories.

One of the largest equipment providers for the coal plant pipeline is General Electric. It is involved in the construction of new coal plants in 18 countries, out of which half are frontier countries, with little or no coal-fired capacity as of yet.

Plans for new coal plants threaten to push 26 “frontier countries” into a cycle of coal-dependency. Out of these 26 countries, 15 have no coal-fired capacity as of yet and 11 have 600 MW or less.

In the European Union, the country with the largest coal power expansion plans is Poland (6,870 MW). Out of 23 companies, which have coal mining expansion plans in Europe, seven are expanding in Poland and nine in Turkey. In both countries the opposition against new coal projects is strong. Villagers from Turkey’s Muğla region are protesting against the plans of Bereket, IC Holding and Limak Energy to extend the lifetimes of polluting coal plants and expand the area’s lignite mines.

Japan is the country with the highest percentage of coal power expansion projects overseas. Out of 30 GW of coal-fired capacity planned by Japanese companies, 51% are being developed abroad.

The country with the largest absolute coal power expansion plans abroad is, however, China. Chinese companies are planning to build new coal plants totalling 54 GW in 20 countries. These account for 24% of the total coal power capacity being developed by Chinese companies.

Out of 99 coal companies operating in Indonesia, 63 are headquartered overseas.

In August 2019, Indonesian citizens filed a court case in South Korea, asking for an injunction to prevent South Korea’s financial institutions from financing the construction of two new coal power plants near Jakarta.

In spite of its new “climate speak”, BlackRock is the world’s largest institutional investor in coal plant developers. In December 2018, it held shares and bonds in value of over US$ 11 billion in these companies.

In June 2019, The Norwegian Government Pension Fund Global took a further step down the coal divestment path by excluding all companies, which operate over 10 GW of coal-fired capacity or produce over 20 million tons of coal annually. The Pension Fund now applies two of the three GCEL criteria to its portfolio. Its total coal divestment since 2015 is estimated to be around € 9 billion.

Philippine NGOs have just launched a campaign to move the Bank of the Philippine Islands (BPI) to also stop financing coal.

The first financial institutions have begun announcing dates for a complete phase-out of coal from their investments. Among these are, for example KLP, Storebrand, Nationale Nederlanden, Allianz, Commonwealth Bank of Australia and Crédit Agricole.