Home › News
NGOs release the 2021 Global Coal Exit List: 1000 companies driving the world towards climate chaos
49% of the companies on the 2021 GCEL still developing new coal assets. Less than 5% of companies on the list have announced a coal exit date.
By: urgewald
2021-10-07
Berlin
Contact: 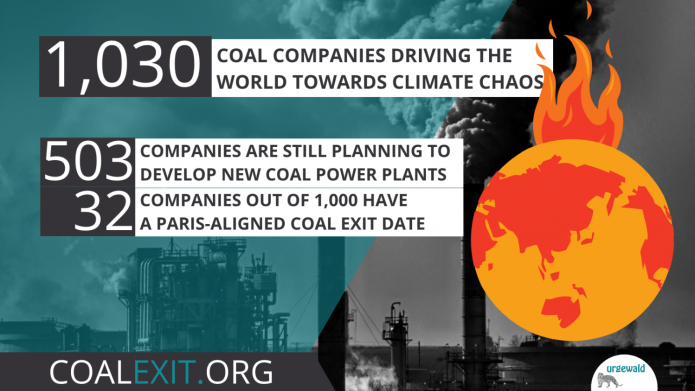 Three weeks before the start of the UN Climate Summit in Glasgow, Urgewald and 40 partner NGOs have released the 2021 update of the “Global Coal Exit List” (GCEL). The GCEL provides detailed data on 1,030 companies and around 1,800 subsidiaries operating along the thermal coal value chain. It is the world’s most comprehensive public database on the coal industry.

When the UK President of COP 26, Alok Sharma, recently blew up the chimney stacks of the decommissioned Ferrybridge C coal plant in the UK, he issued an urgent call to “consign coal power to the history books.” “As long as investors, banks and insurers, however, continue supporting the companies listed on the GCEL, it will be impossible to phase out coal in time,” says Heffa Schuecking, director of Urgewald.

49% of the industry still on expansion course

Since the Paris Climate Agreement was signed, the world’s installed coal-fired capacity has grown by 157 GW, an amount equal to the operating coal plant fleets of Germany, Russia, Japan and Turkey combined. And while many new coal projects were scrapped in 2021, up to 480 GW of new coal-fired power capacity and 1,800 million tons per annum of new thermal coal mining capacity are still in the pipeline. If realized, these projects would increase the world’s coal power capacity by 23% and thermal coal production by 27%.

Out of the 1,030 companies listed on the 2021 GCEL, 503 companies are still planning to develop new coal power plants, new coal mines or new coal transport infrastructure. “Providing insurance, investment and banking services to these companies is a recipe for run-away climate change. Ending support for all coal developers must become an immediate priority for financial institutions worldwide,” states Schuecking.

Less than 5% of the coal industry has announced exit dates

But cancelling support for new coal is not enough. The 2018 IPCC report warned that 78% of the world’s use of coal for power and heat needs to be phased out by 2030 in order to avoid overshooting the 1.5° C limit set out in the Paris Climate Agreement. Yet up to now, only 49 of the 1,030 companies on the GCEL have announced a coal exit date. And in one third of these cases, the coal exit dates are far too late.

Cases in point are the Japanese trading house Marubeni, which announced that it aims to reduce its coal-fired generation “to zero by 2050”; and Japan’s Sumitomo, which stated that it “will end its coal generation business in the late 2040s.” “These exit dates are completely unacceptable as they are not compatible with the 1.5°C goal. And both companies are still constructing new coal power plants in Vietnam and Indonesia. In view of the climate emergency, this is really irresponsible,” says Kimiko Hirata from the Japanese NGO Kiko Network.

Only 32 companies on the GCEL have announced coal exit dates that could be considered Paris-aligned. Out of these 32 companies, 13 are from North America, 12 from Western Europe, 1 from Israel, 1 from Australia, 1 from New Zealand, 1 from Chile, 1 from the Philippines and 2 from China.

Selling, but not closing

“The big question, however, when a company announces it will exit coal is whether its coal assets will be retired or simply passed on to a new owner,” says Schuecking. A prime example is the multinational miner Anglo American, which has been mining coal in South Africa since 1945. Instead of retiring its coal mines and addressing the immense pollution and health problems they have caused for local communities, Anglo American simply spun off its polluting coal assets in June 2021 into a new company: Thungela Resources. According to a report by Boatman Capital Research, the clean-up costs for Anglo American’s former mines will likely be 3 times higher than estimated and exceed the value of the new company. “This type of deal is a lose-lose-lose: For our climate because the mines will keep on operating, for the environment and for affected communities as they will be left with the problems when Thungela Resources is unable to shoulder the clean-up costs. A just transition requires a responsible closure of coal assets and retraining and job creation programs for workers. All Anglo American has done is kick the can down the road,” says Bobby Peek from the environmental justice NGO groundWork, Friends of the Earth, South Africa.

In Colombia, BHP and Anglo American took a similar approach and sold their shares in the enormous open-pit Cerrejón coal mine to Glencore, a company that claims to be on a transition path, but plans to continue mining thermal coal until after 2050. Glencore is also the world’s 9th largest coal mine developer and still aims to add 45 million tons of annual thermal coal production to its portfolio. “Companies like Anglo and BHP are pulling wool over investors eyes when they claim to be decarbonizing. Financial institutions need to require real transition plans from their clients: Plans that result in the rapid closure of coal assets, instead of prolonging their life by selling them to new operators,” comments Schuecking.

As more and more countries adopt coal phase-out legislation and stricter environmental regulations, an increasing number of companies are suing governments before investor-state dispute settlement (ISDS) tribunals in order to defend their coal assets. Showcase examples are Fortum/Uniper and RWE, which are suing the Dutch government under the Energy Charter Treaty because of the Netherlands’ 2030 coal phase-out law. Both companies opened new coal plants in the Netherlands in 2015 and 2016 without considering the possibility that the Dutch government might actually adopt stronger climate policies.

Just 3 weeks before BHP and Anglo American sold their shares in the Cerrejón mine, they filed arbitration claims against the Colombian government together with Glencore at the International Centre for Settlement of Investment Disputes. Their claims are a reaction to the ruling of Colombia’s Constitutional Court that Cerrejón violated the rights of indigenous communities to access to water. In the midst of a severe drought, Cerrejón had diverted a river in order to mine coal beneath the riverbed. The companies are contesting the court ruling under the Colombia-UK bilateral investment treaty by arguing that it has a “significant detrimental impact” on the mine’s production. “Through such claims before ISDS tribunals, companies are undermining democracy by bypassing national court rulings and making it harder than ever for governments to enforce progressive environmental legislation or to phase out coal assets,” says Schuecking.

Exchanging one fossil fuel for another

But even in countries where coal plants are being retired or new coal power projects are dropped, a significant portion of these plants are being replaced not by renewables, but by new fossil gas-fired power capacity. About a third of the coal plants that were “retired” in the US between 2011 and 2019 were actually converted to burn gas. And countries like Bangladesh, which scrapped 1/3 of its planned coal plants, or the Philippines, which dropped over half of the new coal plants in its project pipeline, are now headed towards a massive build-out of LNG terminals and gas plants.

This is extremely worrying as fossil gas is mostly composed of methane, which has 86 times the warming power of CO2 over the first 20 years after it is released. Methane is responsible for at least 25% of today’s warming and methane leaks go hand in hand with the process of extracting, storing and burning gas. As Gerry Arances from the Philippine Centre for Energy, Ecology and Development (CEED) says, “ According to the International Energy Agency’s Net Zero by 2050 Report, the electricity sector must become emissions-free by 2040. Replacing coal with gas makes it impossible to achieve this goal and only serves to create a new fleet of stranded assets. It’s like replacing one poison with another.”

Are financial institutions up to the challenge?

“Many financial institutions justify their continued support of the coal industry by claiming that they want to help their clients transition. But our research shows that the vast majority of companies on the GCEL are not transitioning," states Schuecking. “Coal-fired generation needs to decrease by 11% each year, yet only 32 companies on the GCEL have announced a coal exit date that could be considered Paris-aligned. And only a handful of these companies are planning to actually retire coal assets rather than selling them or replacing them with gas.”

Achieving a speedy coal phase-out will be one of the central themes of the Glasgow COP, yet up to now, large parts of the finance industry continue to back companies with non-existent coal exit plans or even companies that are still building new coal power plants and mines. “This is the decisive decade that counts and we will all pay the price if financial institutions don’t rapidly consign coal financing and investment to the history books,” says Lucie Pinson, director of the NGO Reclaim Finance.

The GCEL was first launched in November 2017 and is updated each fall. It covers the largest coal plant operators (≥ 5 GW installed capacity) and largest coal miners (≥ 10 mtpa); companies that generate over 20% of their power generation or revenues from coal, and companies that are planning to expand coal mining, coal power or coal infrastructure. Investors representing over USD 16 trillion in assets are currently using one or more of the GCEL’s 3 divestment criteria to exclude coal companies from their portfolios. One of these institutions is Ostrum, France’s 4th largest asset manager. In its policy, it writes: “We have decided to draw on the Global Coal Exit List, an initiative by the German NGO Urgewald, following the realization of investors’ difficulties in following their coal investments. Urgewald’s GCEL is a powerful information system and played a significant role in financial institutions’ efforts to develop new coal policies.”

Most of the information in the GCEL is drawn from original company sources, such as annual reports, investor presentations and stock filings. Data on coal power expansion was mainly drawn from Global Energy Monitor’s Coal Plant Tracker. All in all, companies on the GCEL represent 90% of the world’s thermal coal production and the world’s coal-fired capacity.

The 2021 GCEL can be downloaded at www.coalexit.org