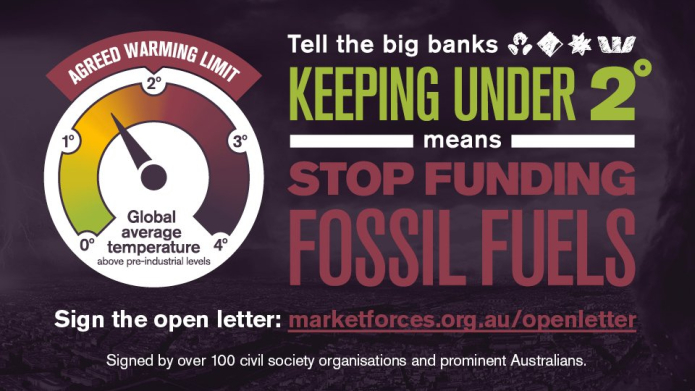 New research released today shows overwhelmingly that Australians want their bank to act on climate change by avoiding fossil fuel projects, with almost half prepared to change banks if their current institution finances projects that damage the environment or worsen climate change.

The research comes as an open letter, signed by over sixty civil society organisations and dozens of prominent Australians, demands the banks get out of fossil fuels by 2030.

Each of the major banks made commitments in late 2015 to help hold global warming to below two degrees, in line with the agreement reached in Paris. However, Market Forces research released on 4 August showed that since their Paris announcements, the "big four" banks (ANZ, NAB, Commonwealth Bank and Westpac) have collectively loaned AU $5.6 billion to fossil fuel projects and companies around the world.

The carbon emissions that would be created from these new fossil fuel projects would amount to 3 billion tonnes, or about six times Australia's total annual emissions.

"If we're going to avoid sending global warming beyond a point of no return we need all parts of the community and the economy pulling their weight. As some of the largest and most powerful companies in Australia, our major banks need to start delivering on the commitments they made to act on climate change", said Market Forces Executive Director Julien Vincent.

"At the moment, the banks' action on climate change is way out of step with their rhetoric. These results show that Australians, especially customers of the major banks, endorse their banks taking serious action to avoid projects.

"We're not just supporting it, we're demanding it and will campaign until we get it", said Mr Vincent.

On 7-8 October, Market Forces is coordinating a nationwide divestment day, in which hundreds of Australians will send the banks a clear message: "If you choose fossil fuels, your customers will choose another bank."

As part of the campaign, a new open letter is calling on banks to make no further investments that expand the size of the fossil fuel industry and to reduce exposure to the thermal coal sector to zero by 2020, and all fossil fuels by  2030.

To view the polling: www.marketforces.org.au/banks-polling-2016

To view the letter and full list of signatories: www.marketforces.org.au/openletter