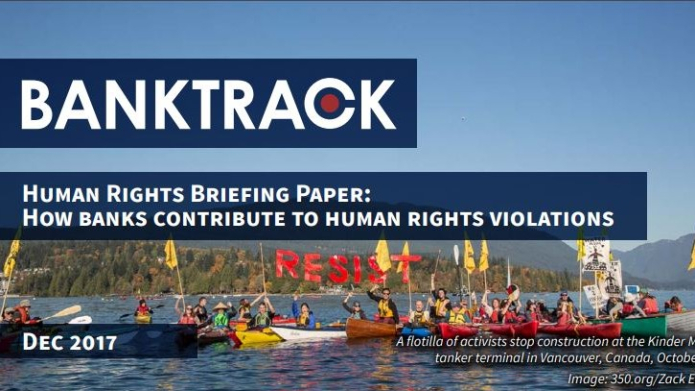 A new BankTrack briefing paper sets out eight recent examples of cases in which banks may have contributed to human rights abuses through their finance, following recent UN guidance to banks on their responsibilities under the UN Guiding Principles on Business and Human Rights. The paper, published to mark Human Rights Day on Sunday 10th December, calls on banks to acknowledge that they can contribute to such abuses through the provision of finance, and develop policies and practices to ensure they can play a role in remedying these impacts, including establishing effective complaints mechanisms for those affected.

Following a controversial January 2017 Discussion Paper signed by eleven banks under the name of the Thun Group, banks claimed that contribution to human rights harm is “rare when providing financial products & services”. Businesses including banks have a responsibility to remediate impacts where they have contributed to them, and the lack of recognition by banks that they can contribute to such impacts through their finance is likely to hinder progress towards banks meeting this responsibility.

BankTrack is campaigning for all banks to fully meet their responsibilities under the UN Guiding Principles. While many banks have developed human rights policies that recognize these Principles since they came into force in 2011, their attention to remediation of impacts is lacking, as BankTrack’s earlier research has shown.

The eight cases profiled in the report include finance human rights impacts resulting from specific projects, as well as sector and country-level impacts. The cases are:

The paper points to a need for banks to take action wherever possible to participate in remedying the adverse human rights impacts in these cases, and to be guided by independent expertise where there are questions about the most appropriate role they can play in remediation.

The paper can be downloaded here.

BankTrack welcomes responses from banks and others on the cases covered in this briefing and the analysis of the relationship of the bank to the impact in each case, as well as on the appropriate role for banks in providing remediation in these cases. We look forward to further multi-stakeholder discussions on the role banks can play in remedying human rights impacts to which they contribute and on how they can promote access to remedy for affected people.

See the Report of the Thun Group of Banks' annual meeting and the Discussion Paper on the Business & Human Rights Resource Centre web page here.