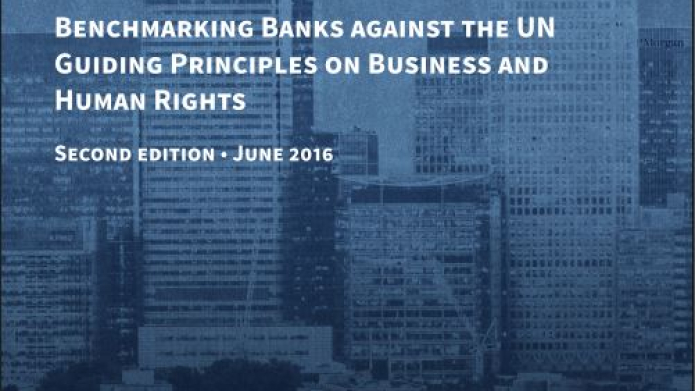 Most banks have made little progress towards meeting UN human rights principles introduced five years ago this month, and even the most advanced banks have significant gaps in their approach. These are the conclusions of the second edition of BankTrack's "Banking with Principles?" report, a major benchmarking study released today.

The report evaluated 45 of the largest banks globally on their progress towards integrating the UN Guiding Principles on Business and Human Rights into their policies, due diligence processes and reporting. The report comes five years after the Principles were unanimously endorsed by the UN Human Rights Council in June 2011. Banks were ranked against 12 criteria based on the text of the UN Principles, in four categories: policies, due diligence commitments, reporting and provision of access to remedy.

More than half of the banks assessed (24 out of 45) scored 3 out of 12 or less, showing little or no evidence that they are actively assessing the potential human rights impacts of their finance. These laggards include major Western banks such as Goldman Sachs, HSBC, Société Générale, Crédit Agricole, Morgan Stanley, Standard Chartered and Bank of America, as well as the "big three" Japanese banks and all four Chinese banks assessed.

Eight banks were identified as front-runners, scoring more than 6 out 12. Rabobank and Citi topped the list, followed by ANZ, Barclays, BNP Paribas, Credit Suisse, Deutsche Bank and UBS. All have developed human rights policies and due diligence processes, and report on their human rights impacts to some degree. However, no bank scored more than 8 out of 12, indicating that all have substantial progress to make before they are fulfilling their human rights responsibilities.

The report also identifies three requirements from the UN Guiding Principles that are not being met by any of the banks assessed. Firstly, no banks showed clearly how they include meaningful consultation with potentially affected people in their human rights due diligence. Secondly, bank reporting on specific human rights impacts was limited and insufficient to evaluate how banks had responded. Thirdly, no banks have yet met the requirement to establish or participate in effective complaint mechanisms.

Fifteen banks improved their scores since BankTrack's first "Banking with Principles?" report in December 2014; half of the 30 banks assessed in both reports. Of the remainder, 13 showed no progress and two declined slightly.

The report follows two Human Rights Impact Briefings published by BankTrack earlier this year, which focus on links between bank finance and serious allegations of human rights abuses: the first looks at labour standards violations in IOI Corporation's Malaysian plantations, and the second at Drummond and paramilitary violence in Colombia. Banks were invited to respond to show how they had met their responsibilities to attempt to avoid or mitigate these impacts, however most banks were unwilling to provide details on the actions they had taken in specific cases.

Ryan Brightwell, BankTrack's human rights campaign coordinator, commented: "The Guiding Principles are a standard of business conduct that is expected by UN member states. Yet we have to conclude that, five years on from their adoption, the level of implementation in the banking sector remains poor.

"It is particularly worrying that banks are apparently ignoring important principles entirely, especially those which require them to ensure that people potentially affected by their finance have their voices heard. Such alarming gaps call into question whether the essentially self-regulatory approach of the UN Guiding Principles is working. "

Andreas Missbach of the Berne Declaration, a BankTrack board member, commented, "Already in 2013 the Thun Group of banks issued a discussion paper that made clear that bank human rights policies should ‘establish clear accountabilities and allocation of responsibility, monitoring and reporting requirements and an escalation procedure for evaluating risks'. That two of the seven signatories of this discussion paper (BBVA and RBS) do not meet this basic requirement is worrying. Equally disappointing is the fact that four of the initial signatories, including Credit Suisse and UBS, did not improve at all since BankTrack's first assessment."

The Banking with Principles? Second Edition is available here.

The first version of "Banking with Principles?", published in December 2014, is available here.

Update: "Banking with Principles?"  on BHRRC:

In September 2016 the Business & Human Rights Resource Centre (BHRRC) published the above report together with six responses from banks. BHRRC invited 6 banks to respond to the findings: Santander, Goldman Sachs, HSBC, Credit Agricole, Bank of America and Sumitomo Mitsui (all banks which had not responded to BankTrack for the first or second Banking with Principles reports). Responses from Credit Agricole, HSBC, Santander, and Sumitomo Mitsui were recieved. Bank of America and Goldman Sachs did not respond.