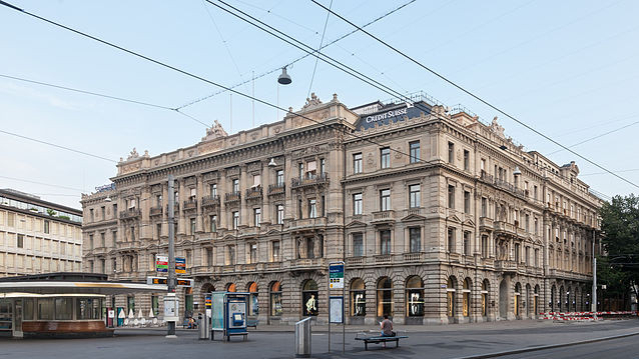 Credit Suisse head office in Zurich. Photo: Thomas Wolf via Wikimedia Commons (CC-BY-SA 3.0)
The public debt of Mozambique, one of the poorest countries in the world, has skyrocketed due to loans totalling over two billion dollars that have been subject to large-scale embezzlement. Half of this sum was granted by Credit Suisse’s UK subsidiary. There are sufficient indications to justify the opening of criminal proceedings in Switzerland to determine the responsibility of the Zurich-based parent company in the granting of the loans and in relation to payments suspected of being corrupt. For this reason, Public Eye has filed a criminal complaint with the Office of the Attorney General (OAG) in Bern, Switzerland.

In early 2016, the press revealed that Mozambique had significantly increased its public debt by accepting loans, some of which it kept secret. Over the course of 2013 and 2014, Credit Suisse International, the UK subsidiary of Credit Suisse Group AG, granted loans totalling over a billion dollars to two Mozambican state-owned enterprises via the maritime company Privinvest, based in the United Arab Emirates. The funds were supposed to be used to purchase speedboats for the coast guard and allegedly to construct a float for tuna fishing in the high seas. The estimated cost of the purchases was hugely inflated, and certain vessels were not operational. In addition to Credit Suisse, the Russian investment bank VTB Capital also lent approx. one billion dollars to the same two state-owned firms as well as a third entity. Immediately after the new debt was announced, the International Monetary Fund (IMF) and numerous donor countries – including Switzerland – suspended their direct budgetary support to Mozambique. The rampant inflation that resulted and the budget cuts adopted by the government took a heavy toll on one of the poorest populations in the world.

On 19 December 2018, the US Department of Justice (DoJ) indicted eight people in connection with the case, notably for their involvement in the corruption and money laundering scheme. Alongside Mozambique’s former minister of finance, who has been arrested for these acts, three former senior managers of Credit Suisse International who made the preparations for the loans to be granted are being investigated in the same case. The DoJ alleges that they jointly organised corrupt payments to Mozambican officials totalling up to 200 million dollars, and of personally benefitting from kickbacks. The three bankers are accused of circumventing numerous internal controls within the bank by making false statements to the compliance department, which was tasked with ensuring that reasonable due diligence has been conducted prior to the granting of loans. The bank did in fact impose special requirements for the loans to be approved: authorisation of the loan agreement by the central bank of Mozambique, approval from the Administrative Court and notification thereof to the IMF. In reality none of these conditions were fulfilled. According to the US indictment, the compliance department did indeed ask critical questions but failed to check the answers provided and ‘to pursue its inquiry further’.

To date, the Swiss Attorney General has simply confirmed that no criminal proceedings have been opened in Switzerland. In response to an article in the Swiss press, Credit Suisse Group AG argued that the loan transaction had been conducted by the UK subsidiary Credit Suisse International in line with ‘clearly regulated’ company guidelines. Nevertheless, the publicly available documents pertaining to the case provide sufficient information to clarify the responsibility of the Swiss parent company. With its criminal complaint, Public Eye is calling on the Office of the Attorney General to investigate whether Credit Suisse Group AG fulfilled its corporate responsibility to oversee its subsidiary and prevent unlawful conduct as required of companies by the Swiss criminal code.

This news story was reposted from the original at PublicEye.ch