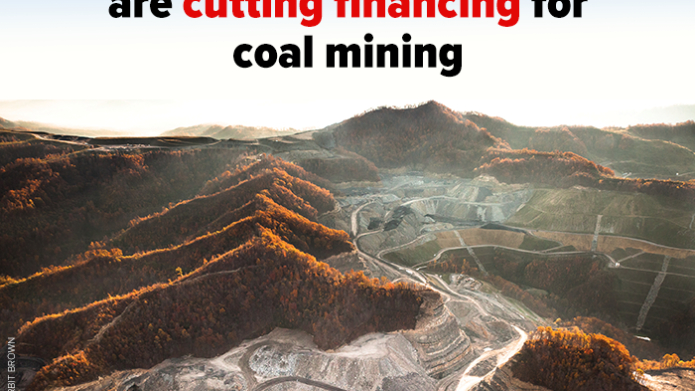 These policy changes follow similar coal financing cuts at seven other banks earlier this year (Bank of America, BNP Paribas, Citigroup, Crédit Agricole, ING, Natixis, and Société Générale). Morgan Stanley's commitment followed public pressure from climate activists as part of a campaign launched by Rainforest Action Network (RAN) in October, the latest in a series of RAN campaigns to hold U.S. banks accountable for their financing of the coal industry.

"Today Morgan Stanley and Wells Fargo announced they are cutting support for the coal mining sector, adding momentum to recent commitments made by Bank of America, Citigroup, and several others," said Lindsey Allen, Executive Director of RAN. "While the policies announced today do not go nearly far enough to realign the banking sector with the reality of climate change, they are a clear indication that major banks agree coal is an increasingly foolish and unacceptable investment."

Notably, Morgan Stanley's coal policy statement acknowledges that the bank has a responsibility to contribute to the transition to a low-carbon economy and commits to report on the bank's policy commitments to cut financing for coal mining and coal-fired power.

These policy announcements come a day before President Obama meets with President Anote Tong of Kiribati and other leaders of small island states, who have called for a global moratorium on new coal mines. They follow calls from the Paris Pledge, a global coalition of over 160 global civil society organizations which has urged the banking sector to phase out financing for coal mining and coal-fired power in the leadup to the U.N. climate conference underway in Paris, COP21.