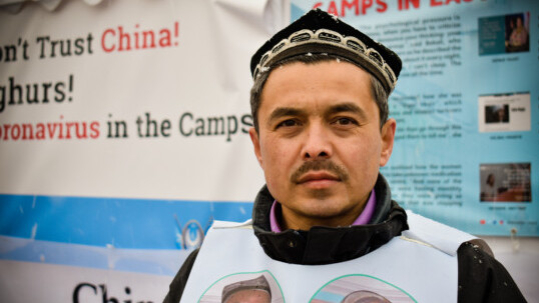 An Uyghur man demonstrates in front of the UN building in Geneva. He shows pictures of his missing family members - disappeared since 2017. Photo: STP

The Swiss National Contact Point for the OECD Guidelines (NCP) is in part responding to the complaint filed by the Society for Threatened Peoples (STP) against the major Swiss bank UBS: it has consented to conducting arbitration proceedings regarding a possible direct business relationship with the Chinese technology company Hikvision. Hikvision plays a central role in the mass surveillance of the Uyghurs in the Chinese province of Xinjiang (East Turkestan). The STP welcomes this step.

According to research by the STP, UBS has maintained a business relationship with Hikvision since 2016. The bank is involved in the technology company through investment products and services as well as manages shares in the name of unknown investors as a “nominee shareholder”. Even though the human rights crisis in Xinjiang (East Turkestan) has been publicly known since mid-2018 and has been repeatedly criticized by the UN and the Swiss government, the bank still had products worth US$ 6.36 million on offer at the end of 2019. UBS continued to invest in Hikvision through investment products and increased its positions in February 2020. Despite international criticism, UBS has not presented any convincing evidence that it acted in accordance with human rights due diligence in the Hikvision case. It is for this reason that the STP filed a complaint with the Swiss National Contact Point (NCP) for the OECD Guidelines for Multinational Enterprises in June 2020.

In its assessment published today, the NCP is partially responding to the STP’s complaint. By arbitration it intends to determine whether a direct business relationship existed between UBS as a shareholder and Hikvision based on the bank's investments in the MSCI China Index Fund. Following public protest, the fund concerned responded to the US government's stipulation in December 2020 and removed Hikvision from the index.
The STP welcomes the fact that the NCP has approved an arbitration procedure. "This is the first time that investments in index funds are to be negotiated within the framework of the OECD Guidelines," says STP campaign manager Angela Mattli. "This is an important step and we look forward to constructive proceedings." Although participation in an NCP procedure is voluntary, the STP expects UBS to enter the negotiation process. According to its Code of Conduct and Ethics, UBS values "stakeholder engagement" and is committed to responding to possible negative impacts of its activities on the environment and on human rights.

The Chinese technology company Hikvision plays a central role in the mass surveillance of the Uyghur population in Xinjiang (East Turkestan). Research by industry experts has shown that Hikvision has installed mass surveillance systems worth close to US$ 300 million in the region on behalf of the security authorities as well as provides technology that is used in the Chinese internment camps. At least a million Uyghurs have been detained in these camps, while the rest of the population is tightly controlled.