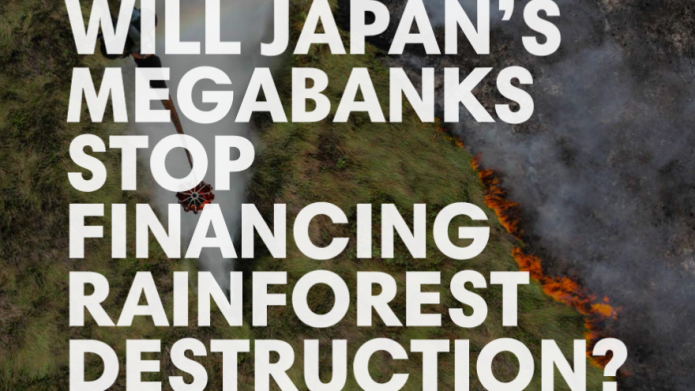 Japan’s largest banks have been furthering the climate crisis through their financing of agribusiness companies. Photo: Rainforest Action Network

A new report published today by Rainforest Action Network (RAN) exposes how Japan’s largest banks have been furthering the climate crisis through their financing of agribusiness companies implicated in Indonesia’s 2019 fire and haze crisis as well as companies illegally clearing forests and peatlands for plantation development.

“While Japan’s three largest banks are financing the construction of more coal plants around the world, they’re simultaneously financing the destruction of some of the most critical carbon sinks on this planet: tropical forests and peatlands. It’s a double whammy on the climate,” said Hana Heineken, Responsible Finance Senior Campaigner at Rainforest Action Network (RAN).

The report titled “Will Japan’s Megabanks Stop Financing Rainforest Destruction?” details the financing practices of Japan’s three largest banks: Mitsubishi UFJ Financial Group (MUFG), Mizuho Financial Group (Mizuho), and Sumitomo Mitsui Financial Group (SMBC Group). Analysis found that between 2017 and August 2019, the three megabanks combined provided over 1 billion USD in loans and underwriting to the agribusiness operations of companies who had their plantations sealed by the Indonesian Government in 2019 due to the fires.(1) The 2019 fires in Indonesia emitted an estimated 709 million tons of GHG emissions, which alone made Indonesia the sixth largest carbon-emitting country in the world.

“By endorsing the UN Principles for Responsible Banking, the three Japanese megabanks have publicly committed to align their business strategies with the Sustainable Development Goals and the Paris Climate Agreement. However, their financing practices show their internal compliance mechanisms aren’t working, and these risks are barely being disclosed to their investors. It’s time the three banks put their money where their mouth is,” said Heineken.

Forests and land are powerful carbon sinks, but their destruction and degradation is leading the land-use sector to be the second-largest source of emissions after energy. Tropical forests and peatlands are especially significant carbon sinks, with peatlands storing over 2600 tC per hectare. Annual emissions related to the destruction of Indonesia’s peatlands for pulp and palm oil is said to be equivalent to 70 coal plants.