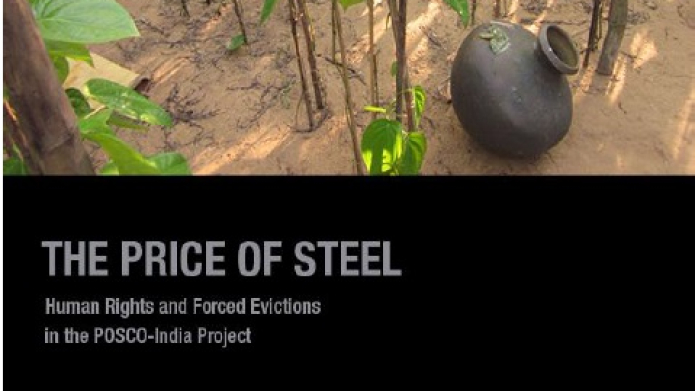 The Government of India must end human rights abuses tied to its project with South Korean steel giant POSCO, and must immediately cease illegal seizures of land which threaten to forcibly displace as many as 22,000 people in India's eastern state of Odisha, said rights groups in a new report released today.

The report, The Price of Steel: Human Rights and Forced Evictions in the POSCO-India Project, comes as affected communities gather to protest the eighth anniversary of the signing of the POSCO-India project MoU, and as some of POSCO's international investors meet in Paris at the OECD's Global Forum on Responsible Business Conduct.

The Price of Steel-which was produced by the International Human Rights Clinic (IHRC) at NYU School of Law and the International Network for Economic, Social and Cultural Rights (ESCR-Net) based on a year-long investigation-calls for a suspension of the POSCO-India project and a halt to abuses before they become even more catastrophic in scale.

"Should the project move forward, entire villages will be decimated, livelihoods will be destroyed, and families will be rendered homeless, all in the name of ‘development,'" said Miloon Kothari, former UN Special Rapporteur on the right to adequate housing and Executive Director of the Housing and Land Rights Network. "Forced evictions present serious threats to human rights. The impact on those affected can often be characterized as a human tragedy."

Worth approximately US$12 billion, the POSCO-India project represents the largest single foreign direct investment in India to date, and will require more than 12,000 acres of land, including approximately 4,000 acres for an integrated steel plant and captive port in an area that is home to forest-dwelling communities and a vibrant and sustainable local economy centered around betel leaf cultivation. For the past eight years, through sustained and peaceful opposition, affected communities-including betel leaf farmers, fisherfolk, and Dalits-have effectively stalled the project and resisted their forcible evictions from lands they have cultivated for generations.

The Price of Steel finds that India's attempts to forcibly evict these communities stand in violation of international and domestic law. International legal standards require that India exhaust all feasible alternatives to forced evictions; engage in genuine consultation with project/affected communities; ensure the provision of adequate compensation for affected properties; and follow procedures established by law. India has systematically failed to live up to each and every one of these standards.
In addition, under India's Forest Rights Act, the government must secure the consent of forest dwelling communities before diverting forested land. Affected communities have passed several village resolutions fervently rejecting the diversion of land for the POSCO-India project, resolutions that the Indian government has effectively ignored.

"India's attempts to forcibly evict communities for the POSCO project are in clear violation of Indian and international law," said Professor Smita Narula, co-author of the report and Faculty Director of IHRC. "Project-affected communities are living under siege, and suffering severe violations of their fundamental human rights. India must act now to end these abuses and put the rights of its people ahead of the needs of a corporation."

Indian authorities have actively targeted those who speak out against the POSCO-India project with violence and arbitrary arrests and detentions. Local police have barricaded villages, occupied schools, and leveled thousands of allegedly fabricated criminal charges against project protestors. Indian authorities have also refused to project protestors from consistent and sometimes fatal attacks by private actors who are allegedly motivated by the interests of the company and of the State.

As a result of these abuses, for the past eight years, entire communities in the project-affected area have been living under siege and have suffered clear violations of their rights to security of person and freedom of movement; their rights to be free from arbitrary arrest and detention; and their right to be free from discrimination-particularly on the basis of political or other opinions. Living under siege has also resulted in significant disruptions to many villagers' ability to access health care, schools, markets, and crops, undermining their rights to health, education, work, and food.

"Thousands of affected community members have struggled to defend their human rights and protect their lands, livelihoods, and dignity." said Chris Grove, Director of ESCR-Net. "Their demands articulate the reasonable expectations of any just economic development. The pursuit of foreign investment cannot come at the cost of human rights."

There is no public evidence to suggest that POSCO has taken steps to use its leverage to call for a halt to forced evictions, or an end to human rights abuses associated with the acquisition of land for the POSCO-India project. Despite widespread reporting of these abuses, in an April2013 letter to ESCR-Net, POSCO stated that it believes the "authorities are not using any force to evict any people."

ESCR-Net and IHRC call on all relevant actors to take immediate action to fulfill their respective obligations and responsibilities, and ensure that human rights are not violated in connection with the POSCO-India project.

Specifically, the rights groups call on:

The International Network for Economic, Social and Cultural Rights (ESCR-Net) is a network of over 250 NGOs, social movements, and advocates in 70 countries that collaborate to strengthen capacity, build solidarity, and undertake collective action to advance social justice through human rights.

See the Korean language version of the Executive Summary

See the Korean language version of the Press Release

The views expressed in this release and accompanying report are those of ESCR-Net and IHRC and do not purport to present NYU's institutional views, if any.