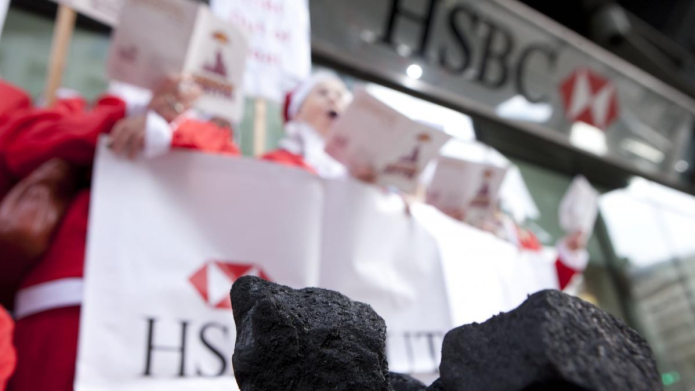 Protestors from the World Development Movement will tell HSBC to pull out of coal at its AGM on Friday 23 May, accusing the bank of fuelling climate change and ruining the lives of people living with the effects of coal mining worldwide.

Coal-gobbling 'bankers' will be strewn over an HSBC logo, joined by protestors holding placards reading, 'HSBC out of coal'.

HSBC has provided the global coal mining industry with £2.1 billion since 2005. It finances more fossil fuel extraction overall than any other UK bank.

HSBC finances coal mining by companies including Anglo American, Glencore-Xstrata and BHP Billiton, the companies behind the Cerrejón mine in Colombia. Cerrejón is South America's biggest coal mine, and has wiped whole villages from the map. It is fiercely opposed by the local Wayúu indigenous people whose land it has destroyed.

Yasmin Romero Epiayu, a Wayúu woman from the area of Colombia affected by the mine, said: "We suffer from the coal dust 24 hours a day. It's like a black smoke that's there all the time."

The World Development Movement's director Nick Dearden said today: "Coal is the worst of all fossil fuels, both for the people whose lives it destroys, and for the global climate. If HSBC's claim to be a low-carbon bank is to have any credibility at all, it must stop pouring money into coal."

Notes to editors
Images of Friday's protest will be available from the World Development Movement.
@wdmuk will tweet from inside the AGM