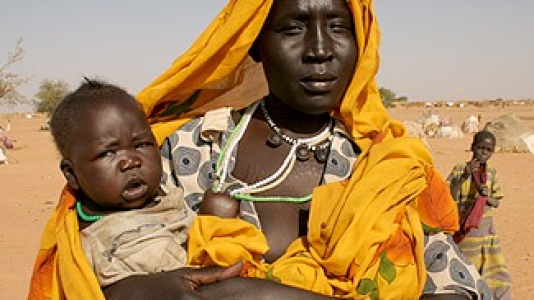 The genocide in Darfur relies mainly on the income of the Sudanese government from the oil industry. Involved are also Swiss financial institutions such as UBS or Credit Suisse which in total hold around 6 billion US dollars worth of investments in the controversial oil companies in Sudan. UBS plans, furthermore, to underwrite PetroChina’s IPO (initial public offering) on the Shanghai stock exchange on 5 November, despite massive international criticism. The non-governmental organisations Society for Threatened Peoples, Berne Declaration, Genocide Intervention Network and Bank Track demand that the financial institutions reconsider their investments.

In today’s media conference, the non-governmental organisations Society for Threatened Peoples, Berne Declaration, Genocide Intervention Network and BankTrack have disclosed the involvement of Swiss banks in companies engaged in the Sudanese oil industry. Around 70 percent of Sudan’s oil income is spent on military purposes. According to Genocide Intervention Network, PetroChina, Sinopec (China), Petronas (Malaysia) and the Indian Oil and Natural Gas Company (ONGC) belong to some of the “highest offenders” and thus are directly or indirectly connected with the genocide in Darfur. PetroChina is furthermore investing over a billion US dollars in a pipeline project in Burma, which will provide the military junta with an income of 150 million US dollars per year.

The genocide in Darfur can only be stopped with the additional use of effective economic pressure - this is why the four organisations call on the Swiss banks to urge their business clients acting in Sudan to take consistent measures to prevent their direct or indirect contribution to genocide. If the oil companies in question do not react, the financial institutions should pull back. In this case, the UBS must resign from underwriting PetroChina’s IPO. Christoph Wiedmer, the manager of the Society of Threatened Peoples demands: “Economic players can no longer deny its responsibility in regions where human rights abuses of this dimension are taking place. Either the investors achieve a change of thinking in the concerned governments and oil companies, or they should cancel their business relations with the problematic companies.”

These financial connections of banks with companies supporting Sudan’s oil income are only one, albeit grave, example of how banks can come into conflict with human rights. This is why Andreas Missbach from the Berne Declaration demands: “The major banks UBS and Credit Suisse must create substantial, attainable and transparent human rights guidelines, in order to avoid becoming an accomplice in human rights violations.”