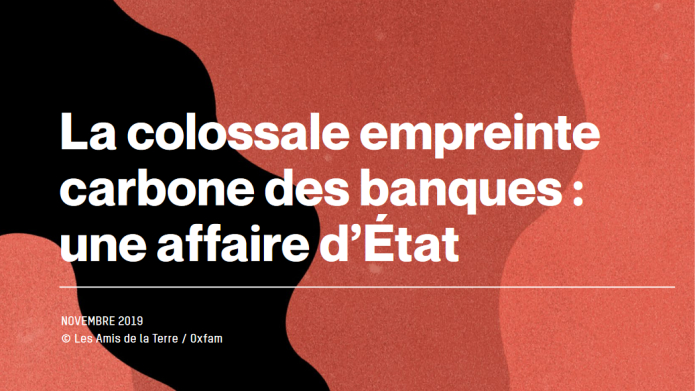 Friends of the Earth France and Oxfam France are publishing today, on the eve of Climate Finance Day which will bring major international finance players to Paris, a new report entitled "French banks’ colossal carbon footprint : a matter of State". They analyse greenhouse gas emissions from the financing and investment activities of the four main French banks - BNP Paribas, Crédit Agricole, Société Générale and Banque Populaire Caisse d’Epargne - in the fossil fuel sector in 2018. The report reveals that the carbon footprint of French banks represents 4.5 times the greenhouse gas emissions of France. BNP Paribas, Crédit Agricole and Société Générale each emit more than France alone, compromising the objective of keeping global warming below 1.5°C.

One Planet Summit, Climate Finance Days... At France’s initiative, the number of major events aimed at mobilizing finance for the climate has increased since COP21 in 2015. However these put communication above action, suggesting that the climate challenge is being taken care of thanks to finance industry self-regulation. But the figures made public today reflect a different reality.

Alexandre Poidatz, advocacy officer ’Financing the Energy Transition’ with Oxfam France, said: "Climate change, and the people who are already its victims, especially in the poorest countries, cannot afford the luxury of banks’ tiny steps. By massively and continuously supporting coal, oil and gas, French banks are among the main contributors to the 1°C of global warming observed since the pre-industrial period. Getting French banks out of their fossil fuel addiction is a matter of life and death. Our ability to guarantee the stability of the financial system (1) as well as to avoid the most dramatic natural and human disasters depends on it.”

Friends of the Earth France and Oxfam France stress that guaranteeing decent living conditions on earth and preventing new systemic financial crises are the prerogatives of public authorities. They denounce the passivity of the government, which positions itself as a leader in green finance at the international level, but relinquishes its responsibilities onto private actors. NGOs point to the influence of the banking industry on policy decisions, resulting from aggressive direct lobbying and the numerous shifts of senior officials from the public to the private sector and vice versa.

Lorette Philippot, private finance campaigner with Friends of the Earth France said: "Only a year ago, French Economy and Finance Minister, Bruno Le Maire, first brandished the threat of restrictive regulation of the banks’ climate change activities (2). But behind the rhetoric, the government continues to delegate the mission of extinguishing the fire to arsonists. From scientists, associations, and citizens, to the French High Council for Climate - all voices demand strong and immediate political action to curb greenhouse gas emissions. The government has the power and responsibility to redirect private capital flows to the low-carbon economy and to align finance with climate goals: it must hold banks accountable.”

As financial actors meet again in Paris on Friday 29 November as part of the Climate Finance Day, Friends of the Earth France and Oxfam France call on the French government to put in place as of 2020 binding standards to ensure that the activities of French banks align with the goals of the Paris Agreement, with the objective of limiting global warming to 1.5°C. Such standards should ensure that banks end their support for expanding fossil fuels and plan for a full exit from coal, oil and gas. The State must guarantee as a priority a coal phase out by 2030 at the latest in European and OECD countries, and by 2040 worldwide.

This report also contains a quantitative and qualitative assessment of the influence of the banking lobby:

This report is based on a research commissioned by the independent research firm Profundo. The research covers the financing and investment activities of four French banks - BNP Paribas, Société Générale, Crédit Agricole, Banque Populaire Caisse d’Epargne - for 4,797 companies. At the initiative of Dutch financial institutions, the Partnership Carbon Accounting Financials (PCAF) methodology was used to quantify the carbon footprint of these French banks in 2018 associated with their support for companies active in the energy or fossil fuel sector.

(1) The dependence of banks on fossil fuels represents a risk that can be very costly for the economy, and for financial actors themselves. The financial world will have to deal with the massive depreciation of carbon assets, which will be penalised by the transition to a low-carbon economy.

(2) Bruno Le Maire (2018) Speech at the Climate Finance Day: "I ask to definitively stop financing the most polluting activities, in particular coal . If these commitments are not respected, we will make them binding.”