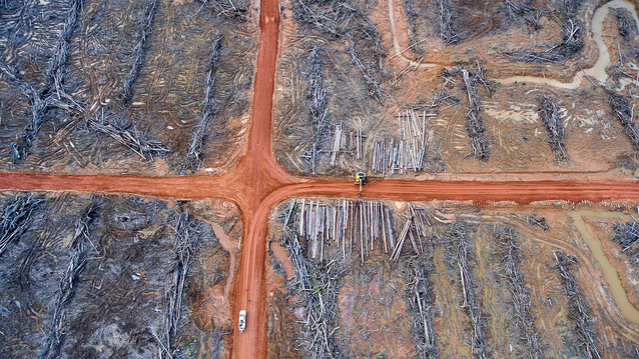 A group of Indonesian protesters, including WALHI North Maluku, gathered at Korindo’s Jakarta headquarters today, as well as the headquarters of Korindo’s principal bank Bank Negara Indonesia (BNI), to demand that Korindo stop destroying forests in North Maluku, leave community territories, and for BNI to stop financing the company.

In North Maluku, community landowners are fighting Korindo to retain control of their traditional lands and forests. Evidence and testimonies included in today’s report demonstrate Korindo has forcibly taken community lands without their consent, illegally used fire to clear land, planted oil palm without required permits, and criminalized communities who resist the company’s operations, including arbitrary arrest and violence.

“Korindo is abusing and exploiting North Maluku and the Indonesian people,” said Ismet Soelaiman, Director of WALHI North Maluku. “From stealing community lands, harassing small scale farmers, to destroying local biodiversity with the monoculture plantation system, ordinary people are paying the price. Right now, Korindo is trying to grab more community forests in North Maluku to sell the timber and plant oil palm. The communities are resisting but they need the help of government and police to stop aiding illegal operations, and instead protect the people, their farms and forests.”

“BNI has committed to be a pioneer in sustainable finance,” said Edi Sutrisno from TuK-Indonesia. “To truly implement this commitment, it must first stop bankrolling companies like Korindo, operating without adequate permits and stealing community land and forests. Financing Korindo is in clear contradiction with BNI’s own standards, and is counter to new financial sector regulations from Indonesia’s Financial Services Authority. BNI should tighten its policies, drop companies like Korindo, and be a sustainable bank for the needs of ordinary Indonesians instead of tycoons.”

Evidence contained in the report also confirms Korindo has been sourcing illegal and unsustainable timber for its mills, and supplying plywood from those mills for the construction of Tokyo 2020 Olympics venues. Photographic evidence, company supply chain data and trade export records show that Korindo plywood used for Olympics venue construction has likely included illegal timber from North Maluku as well as timber cleared from orangutan habitat in East Kalimantan, supplied via the Japanese trading company Sumitomo Forestry.

“The Tokyo 2020 Olympic organizers promised to deliver a sustainable Olympics,” said Hana Heineken from RAN. “Instead, it has used over 110,000 sheets of tropical plywood from Indonesia that is linked to rainforest destruction, land-grabbing and clearance of endangered orangutan habitat, much of it to make way for oil palm plantations. The Olympics is supposed to celebrate human achievement and global solidarity, not be built on top of human rights violations and environmental destruction from remote corners of the world.”

This is not the first time Korindo has been implicated in reckless rainforest destruction and illegal burning.

The findings of this report were put to Korindo for their comment and response, between June and November 2018. Korindo insists that it operates in full accordance with all laws and regulations and that it is a leader in sustainability. Additional responses by Korindo and other named companies are contained in the reports.

A landing page, including a short video with interview testimony of North Maluku villagers and forest defenders as well as other assets related to these reports can be found here.

Japanese language version of the Broken Promises report is here.