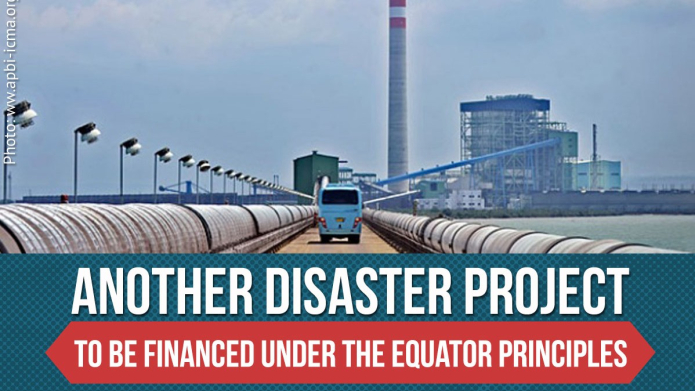 The following is a joint statement issued by a group of Environmental NGOs ー 350.org Japan, Japan Center for a Sustainable Environment and Society (JACSES), Greenpeace Japan, Rainforest Action Network, FOE Japan, Kikonetwork and ASEED Japan ー in response to a public statement made by Sumitomo Mitsui Financial Group Inc.(SMFG) President and Group CEO Takeshi Kunibe in an earnings briefing this week, stating that the company is reconsidering its policy on coal-fired power financing:

“We are following this development very closely and we hope that the statements coming from SMFG President Takeshi Kunibe translates into a meaningful policy in line with the Paris Agreement that ceases all new lending to coal fired power generation and coal extraction. Comments on coal-fired power financing have also been made by Mitsubishi UFJ Financial Group. Mizuho Financial Group has yet to make statements of the sort.

At the same briefing event, the SMFG President is quoted as stating that the company already makes its lending decisions on coal-fired power in line with OECD Guidelines and does not finance projects that carry ‘the risk of a significant negative impact’ on the environment. However, the three major Japanese financial groups have agreed to participate in financing the new polluting Nghi Son 2 coal power station in Vietnam, which is said to produce emissions that exceed international standards as set out under the OECD Sector Understanding on Export Credits for Coal-Fired Electricity Generation Projects.

International groups have signaled that this lending may also breach international commitments under the Equator Principles, a key agreement among banks to manage environmental and social risk. Other projects such as the Batang and Cirebon coal-fired power plants in Indonesia, recently funded by Japan’s financial institutions including SMFG have been associated with human rights violations and environmental damages reported by affected local people. Japan’s three major financial groups ー SMFG, MUFG, and Mizuho ー are also lending huge sums of money to power companies with plans to build 40 or so new coal-fired power stations within Japan.

In order to align its policies with the Paris Agreement, we believe that the responsible step for the three major Japanese financial groups including SMFG to take is to divest completely from financing new coal-fired power projects and companies involved in coal fired power internationally and domestically.

Led by banks in Europe, major international banks are starting to align their business strategies with the Paris Agreement and have published policies restricting finance towards the most carbon intensive industries, starting with coal. ING, BNP Paribas and Deutsche Bank have committed to stop new finance for coal-fired power projects and restrict finance to coal-related companies.

In the global petition led by 350.org Japan and supporting groups, the three financial major groups including SMFG are requested to:

1. Disclose lending and investments in the most carbon-intensive sectors in line with the Task Force on Climate Related Financial Disclosures (TCFD) recommendations;

2. Publicize a business strategy and goals and metrics that are consistent with keeping global warming below 1.5-2℃;

We call upon Japan’s major financial groups starting with SMFG to swiftly adopt and announce a progressive finance policy on coal that adheres to the Paris Agreement.”