Home › News
Dutch banks spend millions on lobbying
The major Dutch banks spend millions on lobby through their own channels, through interest groups like the Association of Dutch Banks (VNB) and lobby organisations in the Netherlands, the EU and worldwide. At the same time, it is often unclear how lobbying is organised exactly and banks are transparent about their activities, concludes SOMO’s latest report A structural problem in the shadows – Lobbying by banks in the Netherlands.
By: SOMO
2016-11-22
Amsterdam
Contact: 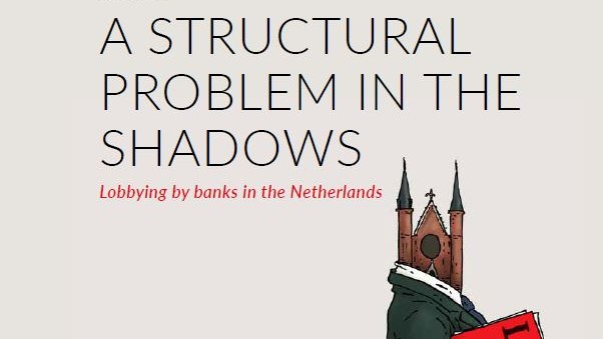 “The powerful lobby by Dutch banks is not very visible in the Netherlands and in the EU, where most financial laws are made. Banks have a very strong influence, at the expanse of public interests”, says researcher Myriam Vander Stichele. “For ordinary citizens, it is close to impossible to find  out how to influence the legislative process regarding financial laws.”

The SOMO study describes in detail how lobby is organised within the six Dutch banks, and how transparent they are about their lobby activities. The major banks ING, ABN AMRO and Rabobank can make their voices better heard at the Ministry of Finance than the smaller banks, Triodos Bank, SNS Bank and ASN Bank.

“ING has the biggest lobby capacity, with an in-house lobby unit of 17 employees. Furthermore, the bank is a member of 38 financial lobby organisations, and spends at least € 400,000 on representation in Brussels with European institutions. They also spent approximately three million euros on their membership of the NVB”, says Vander Stichele. “Because lobby is unbalanced and not transparent, the government risks overhearing public voices, a situation which is regarded as one of the causes of the financial crisis in 2008.”

Last Thursday, the Dutch government responded to Lobby in Daylight by Labour MPs Lea Bouwmeester and Astrid Oosenbrug. The Minister’s response is very meagre and not very concrete: “Lobbying by large banks is a social and structural problem. We think that binding measures are needed to increase transparency, and to ensure that different voices are heard in new legislation”, concludes Vander Stichele.