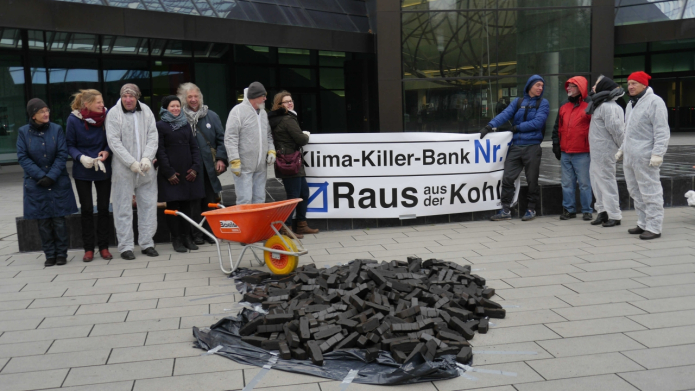 Action by urgewald in front of Deutsche Bank headquarters on 24 November 2015. Photo: urgewald

“This is a welcome and long overdue decision, but addresses only a small part of the problem. Direct project financing accounts for only 2% of banks’ financial flows to the global coal industry. 98% of the problem remains as the new guideline does not stop Deutsche Bank from providing corporate loans and investment banking services to companies with aggressive new build plans for coal-fired infrastructure.

“If Deutsche Bank really wants to bring its portfolio in line with the Paris Climate Agreement, it needs to blacklist clients like India’s NTPC, South Korea’s KEPCO and others who play a key role in driving forward projects that could catapult us into a 4°C world.”