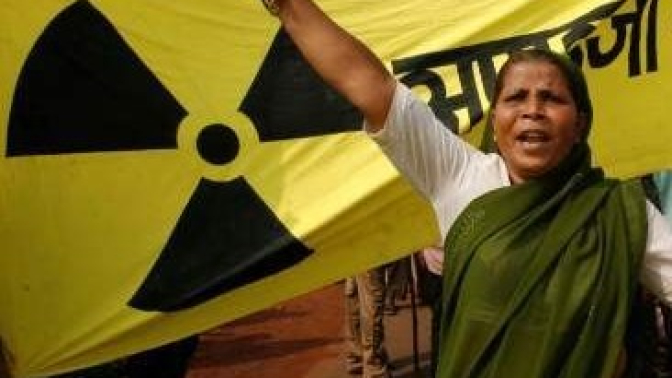 India's Nuclear Power Corporation (NPCIL) encounters difficulties in raising funds for a new nuclear plant situated in a earth quake prone zone. Earlier this year, the company invited over a dozen large banks from around the world to participate in financing the construction of the world's largest nuclear complex near the town of Jaitapur in Western India. While Germany's Commerzbank turned down this invitation, other international banks such as BNP Paribas, Crédit Agricole, Citibank and Deutsche Bank expressed interest in participating in the project.

Last week, people close to the situation confirmed to NGOs, enquiring about the possible role of Deutsche bank in this project, that Deutsche bank has decided to cancel its participation in the bidding process for Jaitapur.

"We welcome this decision of Deutsche Bank and call on other banks to follow suit," says Heffa Schuecking, director of the German environment and human rights organization ‘urgewald'. Jaitapur is one of the world's most controversial nuclear projects as it is located in a high risk zone for earthquakes.

The Indian Government, however, ignored these risks during site selection for the project. According to Karuna Raina of Greenpeace India, "India not only has an alarming track record regarding nuclear hazards but also a complacent safety culture." She points out, that in 1994 for example, the containment of the Kaiga nuclear power plant in the Indian State of Karnataka collapsed due to flawed construction.

"It is astonishing that after ‘Fukushima', the Indian government is still willing to gamble on Jaitapur being different. Responsible banks should back away from such highly irresponsible projects, especially when located in a earthquake zone; we expect banks to learn at least that lesson from the disaster in Japan" warns Yann Louvel, climate and energy coordinator of the international NGO network BankTrack.

Among the other banks that have been approached to finance Jaitapur are HSBC, Standard Chartered, Société Génerale, Crédit Agricole, Citibank and Santander. Financial advisor for the project is BNP Paribas.

BankTrack, Greenpeace and urgewald have written to all banks asking them to dissociate themselves from this project.

Attachment to a link to RTI