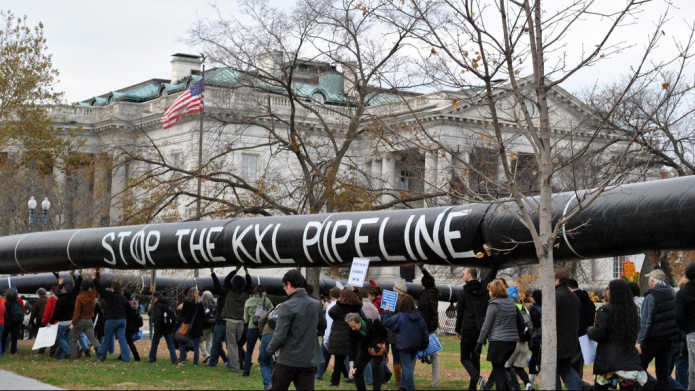 Conservation, environmental and landowners groups argued in federal court in Montana today that the U.S. Army Corps of Engineers’ issuance of a permit authorizing the Keystone XL tar sands pipeline to be constructed through hundreds of rivers, streams, and wetlands failed to evaluate the project’s impacts, in violation of bedrock U.S. environmental laws.

U.S. District Judge Brian Morris on Friday heard oral arguments in the lawsuit filed in July 2019 by Northern Plains Resource Council, Bold Alliance, Center for Biological Diversity, Sierra Club, Natural Resources Defense Council (NRDC) and Friends of the Earth against the Army Corps of Engineers over its approval of Keystone XL under its insufficient “Nationwide Permit 12” process, under which the Corps avoids the transparent and comprehensive review normally required for major projects. The groups maintain that this approval violates the National Environmental Policy Act, Endangered Species Act, and Clean Water Act, and urged the court to require the Corps to conduct additional environmental review of the effects of pipelines like Keystone XL on local waterways, lands, wildlife, communities, and the climate.

The hearing comes as the tar sands industry faces questions about its very future. TC Energy made the stark admission at its latest quarterly meeting that the company is not ready to commit to a final investment decision yet on Keystone XL. Other projects, including the recently canceled Teck Resources tar sands mine “megaproject,” are also struggling to move forward in the face of climate considerations, Indigenous-led opposition, and heightened scrutiny by analysts and investors after $90 billion in tar sands projects have been shelved over the past five years.

Late last year, the U.S. District Court for the District of Montana ruled that the Trump administration violated several environmental laws by issuing a cross-border permit for Keystone XL without adequately evaluating critical information on the pipeline’s environmental impacts, including tar sands oil spills and climate change. Although Trump effectively circumvented that ruling by issuing a new permit in March, the fact remains that the federal government has yet to fully evaluate the pipeline’s harmful environmental effects, as required by law.

"TC Energy has made it clear time and again that they can't be trusted not to spill their dirty tar sands into our water, and yet the Trump administration is trying to give them a free pass to build Keystone XL through hundreds of waterways without even considering the risks to clean water and wildlife," said Sierra Club Senior Attorney Doug Hayes. "We cannot allow this reckless and illegal approval process to stand."

“Farmers and ranchers in Nebraska stake their livelihoods and our food supply on clean water, and the Trump administration’s illegal blanket approval of water crossings for a risky tarsands export pipeline puts that all at grave risk,” said Jane Kleeb, president of Bold Alliance. “TC Energy’s recent admission that its ‘not ready to commit’ to moving forward on KXL combined with the flight of investors from Canada’s tarsands should be evidence enough that this boondoggle of a project will see no reward, and is all risk to clean water, wildlife, and climate.

“The fact that TC Energy itself now refuses to commit to Keystone XL speaks volumes on how flawed and unnecessary the project really is,” said Eric Glitzenstein, the Center for Biological Diversity’s litigation director. “The Trump administration’s so-called ‘streamlined’ permitting process is a desperate farce designed to shield an impending environmental disaster from scrutiny. It is also blatantly illegal and the court cannot allow it to proceed.”

“Pumping some of the world’s dirtiest and most dangerous oil products through our backyards is excessively dangerous,” said Marcie Keever, legal director at Friends of the Earth. “At a moment when TC Energy is second guessing their investment, the Trump Administration continues to push for this unnecessary and hazardous project. We hope the court will ensure that the Army Corps of Engineers performs a proper environmental review.”

“The proposed Keystone XL tar sands pipeline has never been in our national interest,” said Cecilia Segal, an Attorney at the Natural Resources Defense Council. “The recent financial news and skittishness from TC Energy to commit to the project confirms that. We’ll keep fighting to protect our nation’s wildlife, water, communities, and climate from this disastrous and dirty pipeline until we stop it, once and for all.”

"We are confident the court will again see the Trump administration's efforts for what they are:  another illegal attempt to force a dangerous, Canadian tar sands pipeline through Montana ignoring threats to hundreds of waterways vital to our farmers, ranchers, and tribal communities," said Dena Hoff, a Glendive, MT farmer and member of Northern Plains Resource Council. "TC Energy has repeatedly harmed rural communities, including with their 383,000 gallon spill only weeks ago in neighboring North Dakota's wetlands. Our communities can't afford the risks KXL poses to our irreplaceable resources."