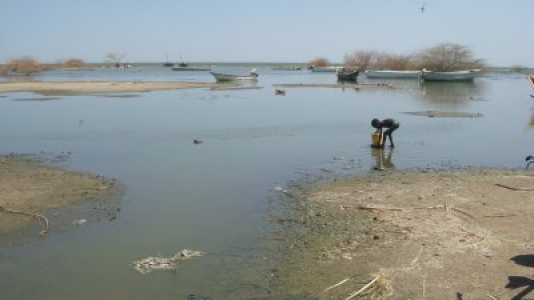 NGOs are outraged after confirmation that the world's largest bank will finance the destructive Gibe 3 hydropower dam. The Industrial and Commercial Bank of China (ICBC) is underwriting a $500 million contract awarded May 13 to Dongfang Electric Corporation for the dam's turbines and electro-mechanical works. Although ICBC has not publicly announced the loan, an official confirmed September 8 by email that the financial agreement between ICBC and the Ethiopian government was signed in July. The funding undermines ICBC's efforts to build a global reputation as a socially and environmentally responsible lending institution.

Ethiopia's Omo River is a lifeline to Lake Turkana in northern Kenya. The 1,870 MW Gibe 3 Dam would shrink the Omo River's flow into Lake Turkana, devastating the lake and some 300,000 indigenous people who depend on it. Severe degradation of Lake Turkana would intensify tribal conflicts and could destabilize the already volatile area between the Ethiopian, Kenyan, and Sudanese borders.

Ikal Angelei, Chair of Friends of Lake Turkana, said: "ICBC is underwriting the destruction of our peoples. Their funding is a hideous gesture of the destruction Chinese funds can bring to Africa's poorest communities."

Terri Hathaway, Director of International Rivers' Africa Program, said: "Development banks and other private banks have turned away from Gibe 3 Dam. Even Italy's export credit agency refused to support the Italian contractor. It is disturbing that ICBC will fund a project which breaks Ethiopian law and has been shunned by the international community."

The Gibe 3 Dam is Ethiopia's largest public infrastructure project to date. The dam's contract was awarded in 2006 to Italian construction giant, Salini Costruttori, without international competitive bidding. Construction began the same year in violation of Ethiopian law and without securing external funding. Four years of aggressive efforts by the Ethiopian government and Salini had failed to attract external funding. In July, the African Development Bank and the European Investment Bank withdrew their funding consideration for the Gibe 3 Dam. In 2008, JPMorgan Chase and SACE, the Italian export credit agency, both refused to finance the dam.

Sonja Willems, Campaign Coordinator of BankTrack said, "This loan makes a mockery of ICBC's actions to establish itself as a socially and environmentally responsible lender. As the world's largest bank, ICBC should strive to become an environmental leader, but instead is building a reputation of undercutting other banks' standards and financing untouchable projects."


Gibe 3 Dam Background
The Gibe 3 Dam Environmental Social Impact Assessment (ESIA) was finalized in January 2009, more than two years after the dam contract was awarded and construction began. The government of Ethiopia broke its own law in 2006 when it awarded the contract without the approval of the ESIA by the country's Environmental Protection Authority. The ESIA has been criticized for its poor analysis and significant gaps in its scope, namely the dam's impact to Lake Turkana.

Due to concerns over the dam's impact to Lake Turkana, in 2009 the African Development Bank commissioned an independent study by Dr. Sean Avery. The study confirmed that the Gibe 3 Dam would reduce flows and threaten the lake's most productive fishing area. It also noted that large-scale irrigation could cut the river's flow by an additional 30%, an impact neglected in the ESIA.

A 2009 independent report by the African Resources Working Group warned that the Gibe 3 Dam could lead to a 12 meter drop in Lake Turkana's water level. Reduced flow would largely be caused by abstraction for large irrigation and seepage losses from the reservoir. Neither impact has been sufficiently studied.

Project developers have ignored the dam's potential to intensify existing tribal conflicts. A 2009 USAID report recommended that a project conflict vulnerability assessment for the downstream indigenous ethnic groups should be conducted.

ARWG. 2009. A Commentary on the Environmental, Socioeconomic and Human Rights Impacts of the Proposed Gibe III Dam in the Lower Omo River Basin of Ethiopia. Available at www.arwg-gibe.org.