This profile is no longer actively maintained, with the information now possibly out of date
Send feedback on this profile
Download as PDF By: BankTrack
Created before Nov 2016
Last update: 2015-11-01 14:53:10 Contact: 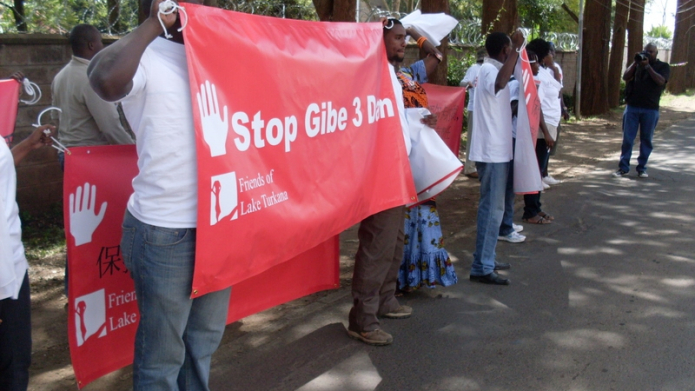 The Omo River is a lifeline for hundreds of thousands of indigenous people in southwest Ethiopia and northern Kenya. In the Lower Omo Valley, a UNESCO World Heritage Site, an estimated 200,000 farmers, fishers and herders depend on the river’s annual flood to support riverbank cultivation and grazing lands for livestock. Another 300,000 people living around Kenya's Lake Turkana rely on the Omo's flow to keep the lake, and its fisheries. thriving.

The Gibe III hydropower dam, under construction since 2006 (and still not complete as of Dec. 2014), will dramatically alter the Omo River's flood cycle, affecting ecosystems and livelihoods all the way to the world’s largest desert lake, Lake Turkana. The dam and associated irrigated plantations will cause food insecurity, chronic hunger, poor health, food aid dependence, conflicts among the local communities for the control of the already scarce natural resources and a general unraveling of the economy and social safety net throughout the region.

The 1,870 MW Gibe III Dam is one of Ethiopia’s largest investment projects. Flawed preparation has exacerbated the dam’s economic and technical risks. In its rush to construction, the Ethiopian government neglected to properly assess virtually every aspect of the project, violating domestic laws and international standards. China's Industrial and Commercial Bank of China is paying for the project's turbines, and the World Bank is helping to fund a connector transmission line to Kenya (which intends to buy some of the dam's electricity), but otherwise no outside funding has been secured, due to the project's many controversies. The government long ago gave up seeking international financing to specifically fund the project, but in 2014 announced a plan to float a Eurobond to help complete its various infrastructure projects, including, it is assumed, Gibe III. The Government specifically mentioned it wil use the bonds to pay for further dams on the Omo, Gibe IV and V, which would devastate Lake Turkana and add to the woes of people in the Lower Omo.

Ethiopia wants to make hydropower a major national export, but climate change and ecological degradation could cause the nation’s hydropower dams to generate far less power than hoped.

The Gibe III Dam project should be halted until:

Taking these steps would result in a more transparent and objective consideration of whether the Gibe 3 project is the best choice for Ethiopia's electricity sector. Untill these steps have been taken commercial banks and other (financial) institutions should refrain from financing this project.

Indigenous peoples in the Lower Omo Valley are placed at great risk due to the dam's regulation of the river flow, which will lead to the elimination of the river’s natural flood cycle. Downstream farmers cultivate the river's banks after the annual flood, a practice known as flood retreat cultivation. The annual flood also supports the renewal of grazing lands for herders, and signals migratory fish species to begin spawning. Without adequate mitigation, the dam will cause food insecurity, chronic hunger, poor health, food aid dependence, and a general unraveling of the region’s economy and social safety net. The dwindling of resources caused by the dam would increase conflicts between local ethnic groups.

The project proposes an artificial flood to mitigate these impacts. However, the proposed flood would last only 10 days, while the natural flood builds gradually over several months, until it peaks in August or September. A truncated 10-day flood would not reach all the areas now nurtured by annual flooding, and would likely fall far short of supporting current agricultural productivity. The artificial flood would also depend on the goodwill of the dam operator. This would create a conflict of interest, since the artificial flood would eat into the operator’s profits. Even if implemented, the artificial flood is so inadequate that it would fail to maintain the local ecology, livelihoods and economy.

The dwindling of resources caused by the dam would increase conflicts between local ethnic groups. Firearms are already omnipresent amongst the region’s communities. But the dam is just one factor in a perfect storm rapidly descending on the Lower Omo Valley. The government of Ethiopia is exploring the area for oil and minerals and planning large-scale agricultural and biofuel schemes, which could further fuel conflicts over traditional land and water resources. The area is also home to the Ilemi Triangle, a volatile area of disputed national borders between Ethiopia, Kenya and Sudan. As traditional resources diminish and government land use increases, latent tensions could erupt.

Project-affected people, NGOs and academics perceived as critical of Gibe 3 risk government-sanctioned retaliation. The poor consultation process, coupled with extreme marginalization of many affected groups, has greatly reduced the chance for critical concerns to be raised and addressed. Project developers have made virtually no information publicly available in Ethiopia to date, leaving Ethiopian civil society uninformed about the project’s potential risks and impacts. Local media coverage has only emerged after critical international coverage appeared in March 2009.

Lack of democratic space
The political atmosphere in Ethiopia has further restrained public debate. A Gibe 3 field investigation report released by USAID in March 2009 noted: "The current political landscape for civil society/NGOs remains difficult in the aftermath of the May 2005 parliamentary elections. This political environment discourages public discourse on development issues, including both energy policy and projects to implement the policy. An NGO law passed in early January 2009 is the most recent attempt to weaken civil society’s voice and disengage civil society from the policy-making process. The new law heavily restricts the thematic areas where civil society organizations can operate and places funding restrictions on local NGOs by international NGOs. The areas that are compromised include governance, civil society, and human rights issues."

The World Commission on Dams found that women and ethnic minorities were disproportionately affected by dam projects. As women are often responsible for ensuring the sustainable livelihoods of their families, impacts on these livelihoods through destruction of fisheries, flooding of agricultural land and forests, and displacement often result in women bearing a disproportionate share of the costs. It is women who are often left with the burden of caring for their families, finding alternative land and water sources and alternative livelihoods when these are taken away through the development of destructive dam projects.

The Omo River and Lake Turkana constitute the Omo-Turkana Basin, shared by Ethiopia and Kenya. The Gibe 3 Dam poses serious hydrological risks to Lake Turkana, which receives up to 90% of its water from the Omo River. An oasis of biodiversity in a harsh desert, Lake Turkana supports 300,000 people and rich animal life. Hundreds of thousands of fisherfolk and pastoralists will be affected if the lake’s fragile ecosystem is stressed to the brink of collapse. Over recent years, the lake has been shrinking and becoming progressively more salty, leaving the region highly vulnerable to climate change impacts. If the water level continues to fall, the lake’s fragile balance could be destroyed.

Transboundary Impacts
The Omo River and Lake Turkana constitute the Omo-Turkana Basin which is shared by Ethiopia and Kenya. Still, project preparation has fully ignored Kenya's customary downstream water rights in this shared river basin. No documentation indicates that the government of Kenya was informed of the dam's impacts to Lake Turkana.

Violation of national and international standards
The construction of the dam violates the UN Declaration on Indigenous Peoples and the Convention on Biological Diversity, and it does not comply with any of the seven strategic priorities of the World Commission on Dams. Moreover, in violation of the Ethiopian Constitution, the affected communities were not properly consulted and have not received any information about the project being implemented on their land.

Gibe 3 construction began in 2006. In its rush to construction, the government of Ethiopia neglected to properly assess economic, technical, environmental and social risks, violating domestic laws and international standards. In July 2006, the government of Ethiopia directly awarded a no-bid Engineering, Procurement & Construction (EPC) contract for Gibe 3 to Italian construction company Salini. According to Transparency International, large public works projects are one of the world’s most corrupt sectors, and no-bid contracts are an open invitation to corruption. The contract, worth EUR 1.55 billion (USD 2.11 billion), violates Ethiopia’s Federal Public Procurement Directive, which requires international competitive bidding. In July 2008, Ethiopia’s Environmental Protection Authority approved the Gibe 3 Environmental and Social Impact Assessment (ESIA). In January 2009, EEPCo released a final version of the documents. These documents have been criticized for their poor preparation and belated release two years after construction began – a flagrant violation of Ethiopian environmental law, which requires an impact assessment be approved prior to construction.

In June 2011 the World Heritage Committee, which oversees the protection of World Heritage Sites around the globe, convened for its annual meeting. The Committee took note of the threats and decided to take action for the protection of Lake Turkana and a host of other sites. It expressed "utmost concern" about the proposed construction of the Gibe III Dam and urged the Ethiopian government to "immediately halt all construction" on the project. It asked the governments of Kenya and Ethiopia to invite a monitoring mission to review the dam's impacts on Lake Turkana, and encouraged financial institutions "to put on hold their financial support" until the Committee's next annual meeting in June 2012.

In June 2010 Friends of Lake Turkana appealed to the Kenyan nation's high court to prevent the government and an energy company from buying power produced by the vast Gibe 111 hydropower dam in neighbouring Ethiopia. They called on the court to freeze the proposed purchase of 500 megawatts, agreed between Kenya and Ethiopia in 2006, until the impact of the project on local communities is fully understood.

In May 2010, Ethiopia and a Chinese hydropower company signed a $459 million agreement for work on the Gibe III hydropower project, with the Industrial and Commercial Bank of China providing a loan for the construction costs. The cost for electro-mechanical and hydraulic steel structure works is $495 million. 85 Percent of the cost will be covered by the ICBC loan.

Funding to cover the full US$1.75 billion construction of the project has not yet been secured, and against a background of opposition from local and international lobbyists, both the World Bank and the African Development Bank have withheld funding until an environmental impact report is received.

The Mega Nile Dam and the Millennium Bond: Redemption or deception of the TPLF Government?

China's dams: both welcome and worrying

Gibe 3: African Development Bank and European Investment Bank out. Who's in?

Letter from Ethiopia: For Addis Ababa, hydropower is the future. Downriver, there’s a lot to lose.

Protecting rivers and rights: Ten years after the World Commission on Dams report

No Water, No Life

Association of concerned people interested in the survival and conservation of Lake Turkana and its ecosystem.
http://www.friendsoflaketurkana.org/

Prize for Kenyan swimming against the tide to stop a dam

Kenya's Ikal Angelei has won one of this year's Goldman Prizes, often called the Nobel Prize for environmentalists.
http://www.bbc.co.uk/news/world-africa-17730438

From the Three Gorges to Gibe III: the Great Dam Builders Whac-a-Mole

A Cascade of Development on the Omo River

An 11-minute film showing what changes Gibe III and associated plantations will bring to downstream communities and ecosystems.
http://www.internationalrivers.org/node/8199