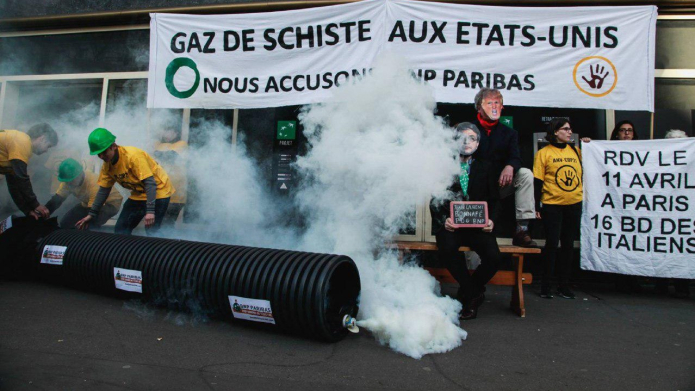 Protest in front of BNP Paribas. Photo: Friends of the Earth France

Friends of the Earth France and BankTrack have strongly welcomed the new commitments of French bank BNP Paribas to help accelerate the energy transition and drastically reduce its financing of so called unconventional fossil fuels: tar sands, shale gas, oil and gas exploration projects in the Arctic region, as well as all related infrastructure for transport and export . Both organisations call upon other banks to follow BNP Paribas’ lead and also take steps to reduce their financing of unconventional fossil fuels, starting at the upcoming Annual Meeting of the Equator Principles Association on October 24 in Brazil.

Reacting to the news, Lucie Pinson, private finance campaigner for Friends of the Earth France, said:

"BNP Paribas is showing real leadership with these new announcements. It is great news for the climate and a huge victory for the groups who have been mobilizing in support of Indigenous Peoples who are on the front line of the impacts of tar sands, shale gas and LNG projects in North America. We call on all other commercial banks to follow BNP Paribas’ lead, and adopt similar measures to align their financing with the Paris Agreement climate objectives."

The announcement follows months of campaigning by many organisations, in France and in the United States, which put pressure on the bank for its involvement in several dodgy deals, including the Dakota Access Pipeline and Texas LNG .

In May this year, a delegation of water advocates and representatives of Native American tribes travelled to France to meet with French banks at their AGMs, to ask them to give up financing plans for tar sands pipelines and liquefied natural gas export terminals in the United States, and to exclude the companies involved from financing. This call has now been honoured by BNP Paribas.

The fact that BNP Paribas will not finance Texas LNG is a serious setback for the project and also a reality check for other French bank Société Générale, which views the Rio Grande LNG project, six times larger than Texas LNG, as being beneficial for the transition to clean energy.

The policy announcement from BNP Paribas comes as international mobilisation increases against three tar sands pipeline projects planned in the United States and Canada (Keystone XL, Trans Mountain and Line 3), after a fourth one, Energy East, got officially canceled last week. If constructed, these projects would result in violations of the rights of Native Americans as well as increased fossil fuel production detrimental to the climate and the environment.

“BNP Paribas has become the first big bank in the world to commit to no longer finance either shale gas pipelines or terminals that liquefy and export mainly shale gas. It is also the first one to not only stop financing tar sands pipelines projects, but also to blacklist the companies building them, as well as those exposed to more than 30% to tar sands or shale gas. This puts the bank far ahead of all other international banks in terms of concretely reducing the financing of extreme fossil fuels that are destroying the climate and local communities around the world.”

Notes for editors:
See BNP Paribas press release.
See the report published in March 2017 by Friends of the Earth France, Rainforest Action Network and Save RGV from LNG, entitled “BNP Paribas vs. Communities and Climate” condemning BNP Paribas for its support of the Texas LNG export project in the Rio Grande Valley.  See also dodgy deal profiles of Dakota Access Pipeline and Texas LNG.
For more details on this meeting and the Global Call to Action to Equator banks see www.equatorbanksact.org