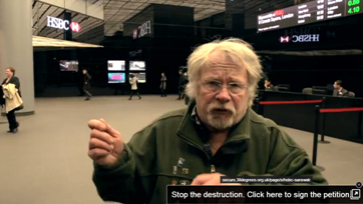 Naturalist and comedian Bill Oddie has been filmed being evicted from HSBC's London headquarters while protesting against the bank's business ties to companies that are illegally destroying rainforests and abusing human rights in Sarawak, Malaysian Borneo.

Oddie has teamed up with the campaign group Global Witness to expose how the UK's biggest bank has made almost £100 million by providing loans and services to some of the most destructive logging companies in the world, in violation of the bank's own policies. The short film pokes fun at the bank's hypocrisy, but its message is deadly serious. A public petition launched alongside the film calls on HSBC CEO Stuart Gulliver to end the bank's relationship with the companies destroying Borneo's last virgin rainforests.

"HSBC has made an absolute killing helping some of the world's worst logging companies get off the ground," said Oddie. "According to HSBC's own rules and all the evidence, it shouldn't be touching them with a bargepole. As a result the last of Borneo's rainforests are under immediate threat.  Everyone needs to sign the petition to stop HBSC profiting from deforestation in Malaysia and beyond, before it's too late."

Mimicking the style of a nature documentary, the film - titled Bill Oddie's BankWatch - studies a new species known as the "HSBC banker" in its natural habitat in London's Canary Wharf.  Oddie is filmed in HSBC's headquarters lambasting the bank's activities in Malaysia, before being forcibly ejected from the premises.

Global Witness investigations have shown how HSBC provided loans and services to logging companies with close ties to Sarawak's Chief Minister Abdul Taib Mahmud. Taib has ruled the state for over three decades and controls all land allocation and forestry licencing, and is widely understood to abuse this power to enrich his family and associates. The companies have been at the forefront of a timber and palm oil bonanza that has left less than five per cent of Sarawak's rainforests unaffected by logging or plantations.

Taib is currently under investigation by the Malaysian Anti-Corruption Commission. By providing services to a sector notorious for corruption and high-level political links, HSBC is at serious risk of violating international anti-money laundering regulations which require it to carry out extra checks on clients linked to senior politicians.

The Global Witness petition, launched in conjunction with 38 Degrees, calls on HSBC to hold its hands up to its wrongdoing, drop the clients in question and fix its forest policies and compliance procedures so that its investments do not finance this kind of abuse in future.

"It's high time our banks stop saying one thing while doing the exact opposite. You would think after all the scandals HSBC has been caught up in of late they'd learn to start telling us the truth," said Oddie. "I made a stand in its HQ because customers and shareholders need to know what is going on. Watch the film - it's funny, but the message is no laughing matter; HSBC must stop bankrolling the world's worst logging companies."