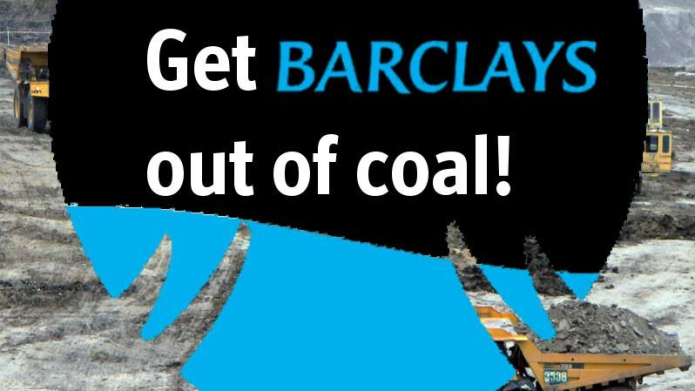 Campaigners from the World Development Movement will protest at Barclays' AGM on Thursday 24 April, accusing the bank of fuelling climate change and destroying people's lives and the environment by financing the global coal industry.

In Indonesia, Barclays has loaned £127 million to mining company Bumi Resources, responsible for evicting indigenous people in Indonesian Borneo from their land. Since 2009, it has also loaned £1.6 billion to BHP Billiton, which plans to open coal mines across a vast area of the Borneo rainforest.

Barclays was also the top global financer of ‘mountaintop removal' coal mining in 2013. The tops of more than 500 mountains in the USA have been blasted off for coal. Banks JP Morgan Chase, Wells Fargo, and BNP Paribas have pulled out of mountaintop removal, but Barclays has increased its financing of the practice, closing £327 million in loan and bond transactions in 2013.

Nick Dearden, director of the World Development Movement, said today: "Coal is the most destructive fossil fuel, both for the climate and for the people who have to deal with coal mining on their doorsteps. Barclays must stop bankrolling dirty coal, at the very least pulling out of mountaintop removal and ending its relationship with the companies mining coal in the Borneo rainforest as a first step."

Notes to editors
Images of Thursday's protest will be available after the event from the World Development Movement.
Paul Corbit Brown from the West Virginia organisation Keeper of the Mountains has travelled to London for the Barclays AGM and is available for interview.
@wdmuk will tweet from inside the AGM.