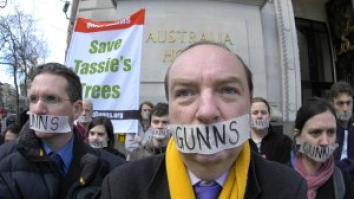 More than 15 leading banks around the world, including all Australian banks, publicly declined to finance the controversial Gunns Pulp and Paper Mill after sustained campaigning from BankTrack, the Wilderness Society and others. In 2008 Australian bank ANZ became the first bank to publicly renounce financing the project. Following a cyber-action in 2009 against Swedish bank Nordea, they followed suit in 2010. In response to sustained criticism, Gunns announced later the same year that it would end logging of native forests in Australia.