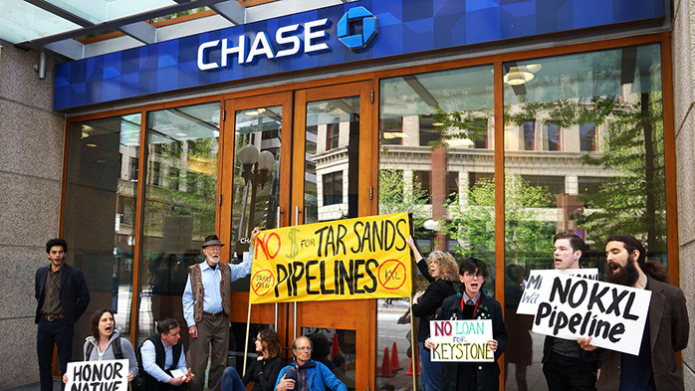 Today, JPMorgan Chase has strengthened its restrictions on financing (lending and underwriting) for coal mining and coal power, and ruled out financing new oil and gas development in the Arctic. These policy improvements come amidst growing protests against JPMorgan Chase for its role as by far the world’s biggest banker of fossil fuels, two months after Goldman Sachs announced similar policies, and less than a week after the leak of a report written by two JPMorgan economists warning of “catastrophic consequences” if emissions are not slashed over the next 30 years.

Rainforest Action Network (RAN) firmly contends that as the world’s worst banker of the climate crisis, JPMorgan Chase bears a unique responsibility among private-sector banks to sharply reduce its fossil finance. These new policies do not meet that responsibility. RAN confirms that the rapidly escalating national pressure campaign targeting Chase will continue.

Most significantly, by focusing only on coal, and Arctic oil and gas, JPMorgan Chase’s new commitments also allow the bank to continue funneling tens of billions a year into other parts of the fossil fuel industry, including tar sands, fracking, pipelines, and liquified natural gas terminals.

Disappointingly, despite the investment bank’s significant new moves on coal, the company’s asset management arm has failed to institute any divestment measures on coal or other fossil fuels, not even matching BlackRock’s modest commitment to divest its actively managed funds of companies with more than a quarter of revenue from thermal coal production.

“In the context of the climate emergency, the biggest fossil bank in the world — by a 29% margin — has a unique responsibility to phase out its climate impact. Today’s policy does not meet that responsibility.

“That said, the measures that JPMorgan Chase took today are steps forward. For the world’s biggest banker of Arctic oil and gas to stop funding new fossil fuel projects in the region adds to the growing signal that the Arctic is a no-go zone for fossil expansion. These measures are a continued credit to the power of the advocacy by the Gwich’in Steering Committee and their allies, who have been organizing for years to defend the Arctic Refuge from fossil fuel development. And Wall Street’s biggest coal mining banker setting an aggressive exit date on some major miners will accelerate coal becoming unbankable.

“A new policy that is on par with Goldman Sachs’s and notably weaker than BlackRock’s does not demonstrate true climate leadership. The bank must stop financing expansion of fossil fuels, with tar sands oil extraction and pipelines being a clear litmus test. Seventeen global banks already restrict tar sands financing, yet in the three years after the Paris Agreement was adopted, JPMorgan Chase provided more finance to the sector than its five major U.S. peers combined.

“And JPMorgan Chase must commit to phasing out its fossil financing on a 1.5°C-aligned timeline. Royal Bank of Scotland, one of the major UK banks, has recently shown that this is a realistic ask with its recent commitment to stop financing fossil companies that are not Paris-aligned, and to halve the climate impact of its financing by 2030.

“On asset management, JPMorgan Chase should build on this new policy by divesting from any companies that are expanding fossil fuels, making fossil-free funds its default offerings, and committing to voting positively on climate resolutions for any stocks it owns.

“In the coming months, the growing Stop the Money Pipeline mobilization will push that case with a public that is growing increasingly alarmed about climate change, a range of shareholder efforts will force the question among investors, and regulators and legislators will continue to watch closely.

“A looming deadline is November’s climate conference in Glasgow, marking the five year anniversary of the Paris Climate Agreement, with financial institutions in the spotlight given U.N. Special Envoy on Climate Action and Finance Mark Carney’s central role in the event. Ahead of that event, JPMorgan Chase has an opportunity to demonstrate genuine climate leadership and has a responsibility to do so.”

Note: Detailed analysis of JPMorgan Chase’s policy update available by request, and will publicly be available at www.ran.org/JPMCbriefer at 8am ET, Feb. 25th.