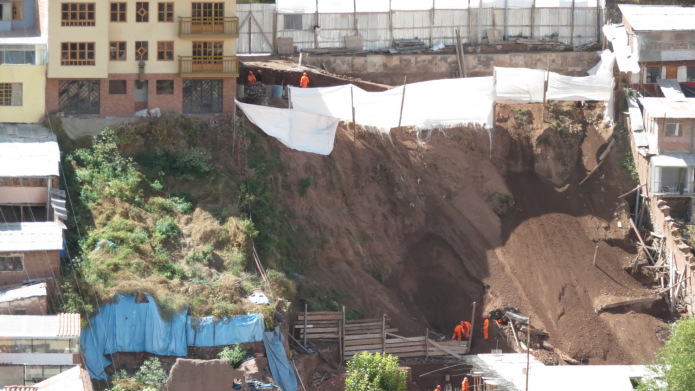 Marriott International and its local partners Inmobiliaria R&G and Corrales Ingenieros, with financing from Banco de Crédito del Perú, have destroyed a registered UNESCO World Heritage site in the historic Inka city of Cusco, Peru. The site consisted of the Inka Huacapunku temple and an Inka cemetery. Five ceremonial burial sites were removed from the cemetery, together with more than 500 Inka artifacts. The demolition of the temple and the illegal removal of corpses and ceremonial artifacts from the cemetery took place to clear the land to build a Marriott "Four Points by Sheraton" hotel on the site. UNESCO has decried this attack against cultural property. The site was a place of religious worship for the Quechua people.

An Inka religious and historic site (including a temple and a cemetery) has been destroyed by Marriott International, with the financing of Banco de Credito del Peru and the complicity of the Peruvian government.

Banco de Crédito del Perú should not provide any further financial support for this project, and should fund the restoration of the site that was destroyed with its financing. Marriott International Inc. should abandon the project and return the Inka artifacts that were removed from the site. The government of Peru should demolish the buildings built on the site and return the site as close as possible to its original condition.

Impact on protected heritage The city of Cusco, the former capital of the Inka empire, is listed as a UNESCO World Heritage Site. To build the hotel, Corrales Ingenieros, Inmobiliaria R&G and Marriott demolished the existing Huacapunku Temple and conducted excavations to build the foundations. In this process, an Inka cemetery was desecrated, five ceremonial burial sites removed and valuable Inka artifacts removed from the site. This activity has been a direct attack on Peruvian cultural heritage. In addition, it has directly affected the Quechua people who used the site as a place of worship.

UNESCO and ICOMOS (the International Council on Monuments and Sites, which advises UNESCO) have sent letters to the Peruvian State requesting the demolition of the hotel. In September 2019 the Cusco Court of Appeals ordered the demolition of the hotel; an order which was welcomed by ICOMOS. However in November 2020 the district court in charge of executing that decision decided that only 10% of the hotel would be demolished. The decision of the district court will be re-examined by the Court of Appeals.

Impact on livelihoods The project has affected the livelihoods of the people living in the surrounding area. When the cultural site was intact there was a harmonious relationship between the normal activities in the neighbourhood and the landscape. The destruction of the site has altered the configuration of the city. The removal of the cemetery is a desecrating activity that has inflicted psychological suffering to the Cusco population.

The construction of such a large-scale project in this area has caused unusual pollution to nearly 3,000 people living in the surroundings. The use of heavy machinery to extract and transport construction material and the debris generated has seriously impacted the community.

Despite many protests, UNESCO’s denunciation and the administrative fines imposed by the new Peruvian administration to Inmobiliaria R&G, Banco de Crédito del Perú continues to be exposed to the project. The bank has responded to the publication of this profile with a letter here.

[English] Workers union of the Ministry of Culture is demanding the demolition of the Sheraton hotel and the restoration of the Inka terraces
2021-01-08 | Ideario.pe
blog
external news
our news

Scandal: Ministry of Culture proposes not to demolish Sheraton hotel in Cusco

Cusco | Sheraton Case: This was found and so did the land before the construction of the hotel from Peru

English translation: "Ministry of Culture imposes fines of 7 million 560 thousand soles to a company that caused damage to the Cultural Heritage of the Nation in Cusco"
2019-04-05 | Peruvian Ministry of Culture
blog
external news
our news

Minutes of a conciliation meeting

Letter from BCP to BankTrack on Notification of dodgy deal publication

Letter from UNESCO to Republic of Peru

Report on removal of ceremonial burials

Workers of Marriott campaign page on the hotel, from the International Union of Food, Agricultural, Hotel, Restaurant, Catering, Tobacco and Allied Workers' Associations

In 2014 Marriott International entered into a contract with Inmobiliaria R&G for the implementation and subsequent operation of a hotel in an area of Cusco’s city centre located in Saphy Street, a sector registered as a UNESCO World Heritage Site. The project was named “Hotel Four Points by Sheraton – Cusco”. In order to build the hotel, Inmobiliaria R&G hired Corrales Ingenieros as constructor. Banco de Crédito del Perú financed this Project with corporate loans for an estimated amount of USD 18.5 million, approved between July 2014 and August 2017.