This profile is no longer actively maintained, with the information now possibly out of date
Send feedback on this profile
Download as PDF Created before Nov 2016
Last update: 2018-08-08 17:24:22 Contact: 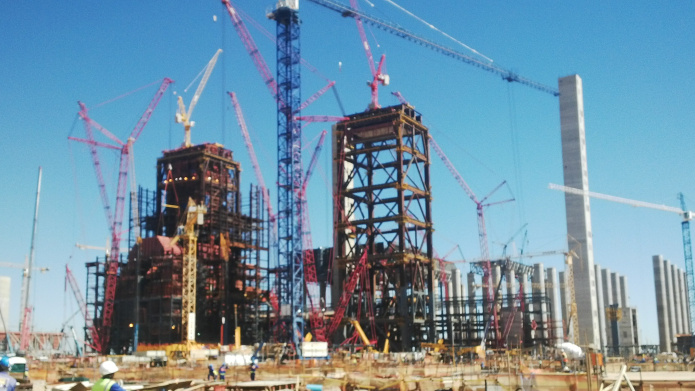 Located in the Nkangala district of Mpumalanga in South Africa, the Kusile Coal Power Plant is being developed by the state-owned utility Eskom. Consisting of six 900-megawatt units, the plant is expected to be the world's largest coal fired power plant when completed. Development continues despite several design defects. The first unit of the plant was connected to the national power grid in 2017, with the second unit following in 2018. The third unit is set to start operating in April 2021. If development and construction takes place according to the planned schedule, the plant is expected to be fully operational by 2024.

Kusile expected to be operational second half of 2017

Control and Instrumentation near completion

Coal is the number one driver of climate change, and construction of new coal-fired power plants anywhere is incompatible with combating climate change. In addition the project will have severe impacts on health and livelihoods.

The building of Kusile must stop immediately. Financial institutions should stop providing any finance to Eskom that may be used to build the Kusile power station. Banks should immediately call an end to financing new coal-fired power plants as an urgent climate protection measure.

Kusile will be responsible for local population displacement and economic harm:

Kusile will significantly contribute to climate change: The annual green house gas equivalent emissions for this single project, 36.8 million tonnes, would increase South African energy sector emissions by 12.8% and the country’s total contribution to climate change by 9.7%. This despite the fact that South Africa already has the distinction of being amongst the top global greenhouse gas emitters per capita. Its energy sector is twenty times more CO2 intensive per capita GDP than even the USA’s. Despite the immensity of its climate impacts, the EIA dedicated less than one page of a 174 page document to the subject with no mitigation measures proposed.

Kusile will also lead to high pollution and health impacts:

Kusile expected to be operational second half of 2017

Eskom has indicated that the first synchronisation of Kusile Unit 1 is now scheduled for the first half of 2017, with the 800 MW unit expected to enter commercial operations in the second half of 2017.

Control and Instrumentation near completion

This completion of control and instrumentation is an indicator in terms of how far the project stands. It is expected that, by the first half of 2018, Unit 1 will be online (source www.fin24.com).

According to enerdata.net: South Africa's national power utility Eskom does not anticipate any load shedding before late April 2016. The company has just reached 50 days without any load shedding despite significant maintenance projects being undertaken over the past two months.

Medupi, the power plant identical constructed as to Kusile, has started delivery to the South African electricity grid. This after a delay of four years and at nearly double the initial budgeted project costs.

Embattled power utility Eskom, which has been experiencing major delays and cost overruns at its two coal-fired megaprojects Medupi and Kusile, gave an assurance that the synchronisation of Medupi Unit 6 is only weeks away, with pipe restoration work between the boiler and the turbine currently under way (source: www.miningweekly.com).

In July 2013 Eskom Holdings issued new 10-year bonds with a total value of USD 1 billion. The proceeds of the issuance were used for general corporate purposes. Both Barclays and Citi assisted with the issuance of these bonds, underwriting them for USD500 million each. It is assumed that half of the bond issuance was devoted to the Kusile power plant and the other half to Medupi.

The Kusile power plant is threatened due to a 25 percent rise in electricity tariffs. It has been said that at 33c/kWh, Eskom is not covering its operating costs. Eskom also has raising costs in their capital expenditure programme. The forecasts of the programme have risen from ZAR84 billion in 2005 to ZAR385 billion. In order to deal with the financial issues faced by Eskom, some solutions have been given such as a loan levy, a review of Nersa's tariff decision, extra equity investment by the government and increasing government guarantees for Eskom debt. After weeks of protests at both Medupi and Kusile power plants, the Medupi power plant resumed operation on May 23, 2011. Kusile is only partially resumed while talks continue to end the protests. The protests began when foreigners were hired as welders while other local contacts were being ended. To read more about the protests go here.

On April 14, 2011 the Board of Directors of the U.S. Export-Import Bank (Ex-Im Bank) voted to approve USD805 million in subsidized financing for the project.

Eskom said it had signed loans totalling EUR705 million (USD917.5 million) from German and Japanese banks as well as obtaining some funds from South African banks. The loans are repayable over 12 years, starting six months after units of the plant are commissioned, it added. The utility is now looking for more financing to complete the Kusile plant, but it is not mentioned how much was needed.

Was responsible for the control and instrumentation works at Kusile power station. Consensual termination has been reached on a co-operative walk-away basis in March 2015.

Control and instrumentation works for the Kusile power station.

Eskom: Kusile and Medupi projects should be put on ice

Externality costs of the coal-fuel cycle: The case of Kusile Power Station

Request for Eskom tariff increase of more than 25%

Eskom: A company in distress

US bank set to approve Eskom loan for Kusile

Medupi to go on line in third quarter of 2012

U.S. Taxpayer-Funded Bank Should Follow the Doctor's Orders on Coal in South Africa

Energy, viability of Kusile and Medupi

Dethroning King Coal in 2011 - From West Virginia to Durban

Coal:French banks are not doing the math

The end of coal?

Fossilized Thinking: The World Bank, Eskom, and the real cost of coal

FoE US - A day’s journey through South African coal country

Blog post about a visit to see the construction area of the Kusile power plant.
http://www.foe.org/news/blog/2012-01-a-days-journey-through-south-african-coal-country

Friends of the Earth fights back against proposal to use U.S. tax dollars to fund dirty coal in South Africa.
http://www.foe.org/news/blog/2010-12-stop-us-financing-for-massive-coal-plant-in-south-af

Blog from Michelle Chan, from Friends of the Earth US, in The Huffington Post.
http://www.huffingtonpost.com/michelle-chan/an-indecent-proposal-will_b_808671.html

The environmental impact assessment for the Kusile Coal Plant was conducted in March 2006. Environmental authorization for the project was issued in 2008 and soon after, the construction operations commenced. Eskom estimated to bring the plant under full operational status by 2019, but delays occurred at many stages. The first unit was brought to commercial operation in August 2017 and the second unit followed in April 2018. In February 2019, various defects were detected in the Kusile and Medupi plants and Eskom stated that it would need an additional ZAR 8 billion to fix these defects. In March 2019 the third unit was synchronized to the grid. Even though units 2 and 3 were connected to the national grid, they still underwent testing and commissioning in July 2019. In October 2020, the second unit achieved commercial operation.