This profile is no longer actively maintained, with the information now possibly out of date
Send feedback on this profile
Download as PDF By: BankTrack
Created before Nov 2016
Last update: 2016-10-18 15:47:01 Contact: 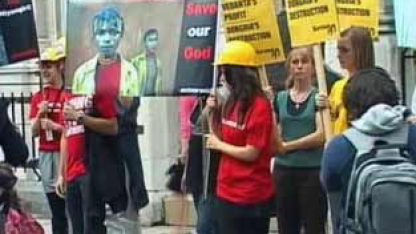 About Bauxite mine Niyamgiri Hills

On October 5th, 2004 an official agreement was signed between the Orissa Mining Corporation (OMC) and Sterlite Industries, a subsidiary of Vedanta Resources plc, for the purpose of mining of bauxite reserves at at the foot of the Niyamgiri mountain, near the town of Lanjigarh.

The mining operation will have massive negative affects on the Dongria Kondh, one of India's most isolated tribes. The company is planning to mine over 1 million tonnes of bauxite a year from reserves within Niyamgiri mountain. Official studies have indicated that this is likely to lead to massive deforestation on the slopes, the destruction of protected local ecosystems rich in biodiversity, and the disruption of key water sources that supply springs and streams on the surrounding hillsides and feed two rivers which irrigate large areas of farmland in southeast Orissa.

Local communities and civil society groups have raised serious concerns about the impacts of the existing refinery operation, the proposed expansion of the refinery, and the mine.

Financial institutions that have a social ethic or a concept of responsible lending should sever ties with Vedanta Resources and its subsidiaries.

The Dongria Kondh are considered a 'scheduled-tribe', living on the Niyamgiri Hills. Their economy is based on gathering forest products in these hills. Vedanta is determined to strip-mine the Niyamgiri Hills for Bauxite. If Vedanta is permitted to mine in Niyamgiri, two of India's strongest institutional guarantees will be overturned; the right of a 'primitive' tribal group to their territorial integrity and to decide on their own path of development (Schedule V of the Indian constitution), and the right to religious practices and beliefs (Article 25).

Nonetheless, the company has already built an aluminium refinery in the town of Lanjigarh at the foot of the mountain. Several villages have had to make way for the refinery. Others will have to vacate their lands as the plant expands and feeder roads, airstrips, and toxic waste ponds are built.

In March 2009 Amnesty International visited Lanjigarh to assess the human rights situation on the ground. Their findings show that both the proposed mine and the refinery have serious implications for the human rights of the affected communities – including the rights to water, food, health and a sustainable livelihood. Read more.

The dense forests of the Niyamgiri Hills are one of the most important biodiversity hotspots in eastern India. The area was proposed as a wildlife sanctuary by the Indian Ministry of Environment and Forests (MoEF) in 1998 and was designated as an Elephant Reserve by the State of Orissa in 2004. There are more than 300 species of plants and trees on Nyamgiri Mountain, including at least 50 species of medicinal plants. The forests are home to sambhars, leopards, tigers, barking deer, elephants, sloth bears, pangolin, the rare golden gecko and many other endangered species, whose habitat is protected under section 18 of the Indian Wildlife Act.

The Niyamgiri Hills are also integral to the ecosystem of a much wider area. More than 30 streams and two large rivers, the Nagavali and Vamsadhara depend on water flow from the Nyamgiri hills. The bauxite deposits and the forests are essentially overhead acquifers, feeding the rivers during the dry season. The hydrological systems on which hundreds of thousands of people depend will be severely impacted if Vedanta's plans go ahead.

In the Niyamgiri forest Vedanta Resources has illegally felled hectares of forest. After the clear cutting, an aluminum smelter was built without the necessary permission. The Orissa pollution board has found that the smelters waste water has contaminated the Vanshadhara river as well as local groundwater. The smelter is designed to process bauxite from the surrounding mountains.

A commission of the Indian High Court has condemned Vedanta for the consequences of the bauxite mining on the indigenous population. Vedanta already faced censure in 2004 for dumping toxic waste from the Tuticorin copper smelter in Tamil Nadu. A working group of the Indian High Court wrote in 2004 that the waste processing of the copper smelter failed.

In response to the protests that took place in May, the Ministry of Environment and Forests of India released a statement on June 3rd, 2011, saying that an assessment took place of the red mud wall and in fact a breach did not take place. Their exact words were, "...There was no breach of the red mud pond and pH of the water body in the down stream of red mud pond was within the prescribed limits." To find out more please read on.

On 16th May 2011 after heavy rain, toxic red mud poured from a breach in one of Vedanta's Lanjigarh refinery red mud ponds, spilling onto the village below. The next day landless people displaced by the project held two blockades demanding adequate compensation; a five day walking protest ended with a meeting of 500 people on the threatened Niyamgiri hills; and the funeral of a tribal movement leader, killed by factory pollution, was held. Two months before Vedanta's often-subverted AGM this will be bad news for the company. Read more.

On March 12, 2010, a research committee appointed by the Indian government submitted a report that contradicts the claims of Orissa Government officials that the implementation of the Forest Rights Act (FRA) has been completed. The report states that there is enough to show that serious damage would be caused to the Dongria Kondh and the environment and show cause notices have been issued to Vedanta and its companies. Vedanta's plan to mine bauxite in Orissa could be jeopardised if the environment ministry accepts the findings of the report. The MOEF report was written by an appointed three-member committee, comprising Usha Ramanathan, an independent law researcher, Vinod Rishi, additional director general (wildlife) at Dehradun’s Wildlife Institute of India, and JK Tewari, chief conservator of forests, MoEF (Bhubaneshwar), with the objective to look into the various allegations against Vedanta. Read full report here.

On August 24 2010, Vedanta's plans to mine bauxite on sacred tribal land of the Dongria Khond were halted by India's environment ministry. By not granting permission for forest clearence, also the environmental clearance for the mine is inoperable. The Indian Minister of Environment and Forest Jairam Ramesh concluded that serious violation of various laws have taken place, these include the Forest Conservation Act, 1980, the Environmental Protection Act, 1986, the Scheduled Tribes and Traditional Forest Dwellers Act, 2006, and many others, and that his Ministry would examine what penal action should be initiated against the project proponenst for the violation of these laws. Read full report here.

Vedanta: time to give up on Niyamgiri mine

It is ‘no’ to Vedanta’s mine project in Orissa

Vedanta mines illegal, must be shut down: Green panel

Let's save the real Avatar: The survival of the Kondh Tribe is hanging in the balance

Vedanta’s Orissa plan to take off

A different kind of red terror

Stop the Vedanta Project in Orissa

Vedanta takes on critics of mining at India tribal site

India: Government must stop bauxite mine and refinery expansion (Vedanta) until human rights are addressed

Red mud spill and people's resistance at Niyamgiri: A first hand report from the struggle

Don't mine us out of existence

Human rights are your business

Briefing on Vedanta and the Niyamgiri Hills

In 2003 Vedanta signed a Memorandum of Understanding with the Orissa state government regarding the construction of a refinery for alumina production, a coal-based power plant, and a mining development at Lanjigarh in the district of Kalahandi.

In 2003 Vedanta applied to the Ministry of Forests and Environment (MoEF) for an environmental clearance for the refinery. In its application the company provided wrongful information to the effect that the refinery would not require forest land.

On 22 September 2004 the company was granted the MoEF’s environmental clearance for the construction of the refinery independently of the mining project. The approval establishes that the refinery will not require the use of forest land.However, the CEC’s investigative report shows that Vedanta one month earlier, on 16 August 2004, while the application regarding an environmental clearance for the refinery was being processed, had submitted an application for reallocation of forest land to the Forest Department at the MoEF. From the application it appears that the company will have to use forest land for the construction of the refinery, including preservation areas.

Vedanta continued the construction of the refinery. In February 2005 the MoEF's Forest Department issued a so-called show cause notice to the company for violation of the Forest Conservation Act and for having cleared and levelled woodland.

On 23 May 2005, the Ministry ordered the construction work at the refinery to stop. Vedanta then argued that the refinery could be built without using forest land after all, and that the MoEF's imposition was therefore not relevant. The company then withdrew the application regarding use of forest land, something which the Ministry accepted after recommendations from Orissa state authorities. At the same time the Ministry revoked the stop order given to the company.

In its report to the Supreme Court, the CEC therefore recommended that the environmental clearance for the refinery project be revoked and the mining operation at Niyamgiri banned. The Supreme Court did not pronounce on the CEC recommendation, but referred the case to the MoEF for further analysis. The MoEF engaged the Wildlife Institute of India (WII) to examine the mining project’s expected impact on the biodiversity of the Niyamgiri Hills. The report was to be presented in court on 13 October 2006 with the Ministry’s recommendation to the Supreme Court, but during the session the MoEF requested a postponement.

The CEC prepared a new report on Vedanta, commissioned by the Supreme Court and submitted in January 2007, in which the conclusions of its previous report are confirmed
and partially reinforced.

Vedanta Aluminium Limited (VAL), a subsidiary of Vedanta Resources has operated an aluminium refinery at Lanjigarh in Kalahandi district in the state of Orissa, India since 2006. In January 2009, VAL applied for clearance for a six-fold expansion of the refinery. This clearence is still pending. Vedanta is also planning to mine bauxite in the area via its subsidiary company, Sterlite Industries India Ltd.

In April 2009, the India authorities gave Sterlite and the state owned Orissa Mining Corporation permission to mine bauxite in the Niyamgiri Hills, about 10 kms from the Lanjigarh refinery.

In October 2009, the UK National Contact Point for the OECD Guidelines for Multinational Enterprises reponded to a complaint filed by the NGO Survival International in December 2008, with the conclusion that Vedanta failed to put in place an adequate and timely consultation mechanism fully to engage the Dongria Kondh. With the aim of assisting Vedanta in bringing its practices in line with the Guidelines, the UK NCP made several recommendations to Vedanta, which untill date have not been taken serious by Vedanta. Read full report here.