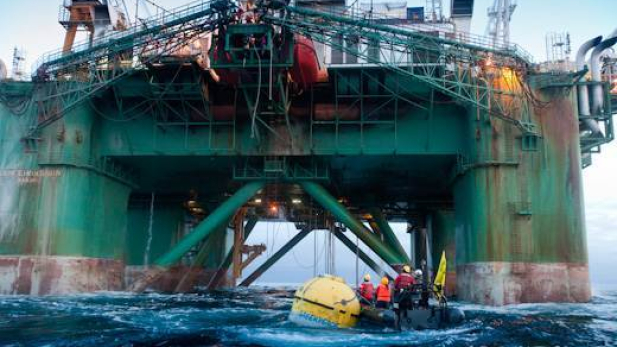 activists from Greenpeace are taking direct action against oil drilling in the Arctic. . Photo: Greenpeace

Arctic drilling and its impacts

The United States Geological Survey estimates that 30% of the world's undiscovered gas and 13% of the world's undiscovered oil is to be found north of the Arctic Circle. Of this oil, 84% - approximately 90 billion barrels - is expected to be found offshore, some of it in deepwater. Harsh conditions, low temperatures, operational windows cut short by the winter freeze-over, icebergs that threaten to collide with rigs and a delicate ecology that requires meticulous protection all conspire to make oil production here difficult, risky and expensive, possibly more so than any other region in the world.

Many social and environmental issues characterize Arctic drilling including:

A 2017 study commissioned by the Wilderness Society found that conditions in the Arctic mean development of its oil and gas reserves are costlier, riskier, and lengthier than such development elsewhere in the world, and that revenues and jobs projected to come from leasing land for development in the Arctic National Wildlife Refuge were based on "undiscovered economically recoverable reserves estimated using now-outdated financial data and technological assumptions." In addition, these projections "did not consider external costs such as climate change, loss of habitat, human health effects of the release of toxins, and spill preparedness and response."

The largest producing oil field in North America is the Prudhoe Bay field, located within the Arctic Circle on Alaska's North Slope. The Trans Alaska Pipeline System (TAPS) includes the trans-Alaska crude-oil pipeline, 11 pump stations, hundreds of miles of feeder pipelines, and the Valdez Marine Terminal, to which oil is delivered from Prudhoe Bay. The North Slope is home to thousands of migratory birds, caribou, and other creatures. An oil spill in 2006 led to the oil field operator BP being fined $20million for neglecting severely corroded pipelines.

Alaska wants to develop a $43 billion LNG export terminal designed to commercialize the state's 34 trillion cubic feet of stranded North Slope gas, which would then mostly be sold to China. A 2017 study commissioned by Friends of the Earth found that LNG has an enormous climate footprint, due to methane leakage throughout its lifecycle as well as the significant amount of energy required to transport and freeze gas for export. Estimates of greenhouse gas emissions from LNG supply chains are nearly double those of average pipeline supply chains.

The Arctic National Wildlife Refuge (ANWR) covers approximately 19.64 million acres of land and water in northeastern Alaska. US Congress has approved a bill to open up the ANWR to drilling for oil and gas. In 2017, the US government passed a bill opening up a portion of the ANWR to oil and gas development, and are aiming to sell drilling leases to oil companies this year.

The ANWR is a habitat for caribou, moose, black and brown bears, polar bears, seals, wolves, up to 200 species of migratory birds, and many species of fish and insects. The caribou population here has provided subsistence for the Vuntut- Gwich’in first nation for thousands of years. All of this is put at risk by potential oil and gas development.

Bank moves out of Arctic oil and gas

Some banks have begun to restrict finance for arctic oil and gas development. The following pages list the moves by international banks to restrict project finance and general corporate finance:

To avoid the devastating impacts of their investments, private sector banks must take steps to disengage from all activities and projects that substantially contribute to climate change and environmental and communities degradation, by ending support for all new oil extraction and delivery.

Back to Banks, Climate and Energy

As Banks and Investors Reject Arctic Drilling, Where is Wells Fargo?

City investors are getting cold feet about Arctic oil prospecting

Save the Arctic? No thanks, says UK Energy Minister

Government documents: Arctic oil spill all but impossible to clear up

Wikileaks reveals Arctic could be the new cold war

How an Arctic oil rush will help suffocate the planet

Banks urged to back off from Sakhalin II

Out in the cold

Greenpeace press brief: The risks and potential impacts of oil exploration in the Arctic

Polar oceans in peril and a planet at risk

Arctic drilling next? Hell no!

Putting a stop to the Arctic Meltdown