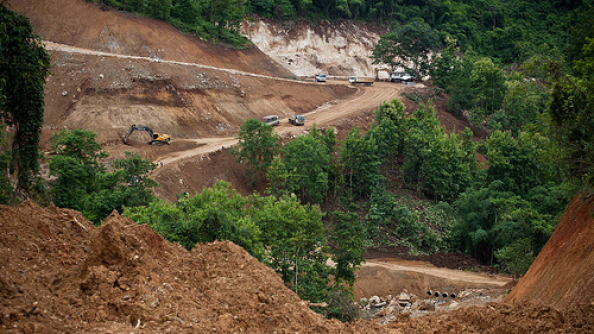 Bangkok, Thailand - As the governments of the Mekong region continue to deliberate on the proposed Xayaburi Dam in Laos, the Thai government has defied the regional decision-making process and pushed ahead with the project's implementation. Recent oversight hearings by the Thai Senate and the National Human Rights Commission confirm that the government has joined Laos in concluding that the regional process is complete, thereby allowing Thai developer Ch. Karnchang to proceed with construction.

"The Thai government has ignored the agreements made last year amongst the four regional governments and the concerns expressed by Cambodia and Vietnam. With more than eight provinces in Thailand at risk from the Xayaburi Dam's transboundary impacts, the state has also disregarded its duty to protect its own people from harm. It's irresponsible to push forward with this dam, when the project's impacts on Thailand have yet to be adequately studied," said Pianporn Deetes, Thailand Campaign Coordinator for International Rivers.

An investigation by International Rivers last week revealed that preliminary construction on the Xayaburi Dam is continuing, despite the agreement by the governments of Cambodia, Laos, Thailand and Vietnam in December 2011 to pursue further study of the impacts of hydropower on the Mekong River before deciding whether to build the project. A large number of workers have been employed for a two year period to construct access roads and facilities for the project.

In a letter dated 30 January 2012, the Thai Minister of Energy Arak Cholthanon informed the Senate Committee on Corruption Investigation and Good Governance Promotion that "the Ministry of Natural Resources confirms that the Prior Consultation process has completed." Minister Cholthanon further stated that "EGAT and the Xayaburi project developer have signed the PPA on 29 October 2011."

Thailand has not disclosed the power purchase agreement to the public.

"The Mekong River Commission governments have not yet reached agreement on the Xayaburi Dam nor have they closed the prior consultation process," said Ms. Lam Thi Thu Suu, Director of the Centre for Social Research and Development in Vietnam. "By committing to purchase power from the dam and moving forward with the project's implementation, EGAT and Ch. Karnchang are violating the trust and goodwill of Thailand's neighbors. No construction on the Xayaburi Dam should proceed while further study is underway."

On 21 February 2012, the National Human Rights Commission of Thailand organized a public hearing on the Xayaburi Dam after receiving a complaint from Thai communities in eight provinces. Several Thai government officials testified about their involvement in the project, including representatives from EGAT, the Ministry of Energy, and the Energy Regulatory Commission. Five Thai companies also testified about their involvement, including Thai project developer Ch. Karnchang and investors from Krung Thai Bank, Bangkok Bank, Kasikorn Bank, and Siam Commercial Bank.

The hearing confirmed that the four Thai banks have already provided financial support for the Xayaburi Dam. In a resolution on 15 November 2011, the Thai Cabinet granted permission to state-owned Krung Thai Bank to invest in the project. When the Commission asked about the steps they took to examine the project's environmental and social impacts, however, the banks were not able to provide detailed information.

"It's astonishing to think that the financiers of this project have not taken the dam's significant environmental and social impacts more seriously. Even a five minute search on the internet would reveal numerous media reports that highlight the concerns of the Thai people," said Ms Deetes. "The recklessness of EGAT's and the Thai companies' pursuit of the project is likely to become a catastrophe for our country's reputation. We call on the Thai government to immediately cancel the power purchase agreement and for Thai banks to withdraw financing from the Xayaburi Dam."

Although the Xayaburi Dam site is located in Laos, Thailand is building and financing the project. The Thai government plans to purchase 95% of the electricity, although an independent study has already concluded that the Xayaburi Dam's electricity is not needed to meet Thailand's demand for energy in the coming decades.