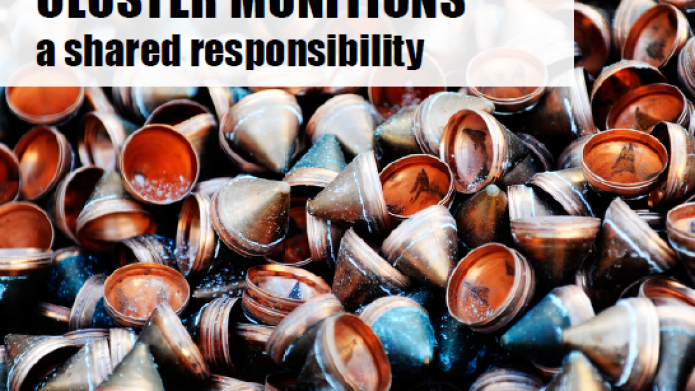 Worldwide, 139 private and public financial institutions continue to invest more than US$24 billion into producers of banned cluster munitions. The majority of these financial institutions are from the United States, South Korea and China. This is shown in the report Worldwide Investments in Cluster Munitions; a shared responsibility which IKV Pax Christi issues today.

The report is released today in Copenhagen to encourage Denmark and other governments to legislate against these kinds of explosive investments.

Although the total amount invested has dropped from US$43 billion to US$24 billion since the last report in 2012, the number of financial institutions investing remains high. "Cluster munitions cause unacceptable humanitarian harm amongst civilians. To continue to invest in producers of these banned weapons is ethically unacceptable. It is time for both governments and financial institutions to ban these explosive investments for good." said Roos Boer, co-author of the report for IKV Pax Christi.

Lockheed Martin
The US$19 billion drop since last year's report is due to the fact that Lockheed Martin stopped their involvement with production of cluster bomb components. Since the first report four years ago, three companies announced that they stopped production of (components of) cluster munitions: L-3 Communications (USA), Lockheed Martin (USA) and Roketsan (Turkey).

24 billion US dollar
In the period 1 June 2010 to 31 August 2013, 139 financial institutions invested more than US$24 billion in the seven cluster munition producers researched in the report. They:

Hall of Shame
The report's 'Hall of Shame' contains 139 financial institutions based in thirteen different countries that invest in cluster munition producers. Most (67) are from the United States, followed by South Korea (23) and China (19). None of these countries have joined the Convention on Cluster Munitions. Also of concern, the report demonstrates that there are 22 financial institutions from countries which have joined the convention that still invest in cluster munition producers (Canada, France, Germany, Japan, Switzerland and the United Kingdom).

Indiscriminately
Like landmines, cluster munitions are banned under international law because they kill indiscriminately. The 2008 Convention on Cluster Munitions (CCM) categorically bans the use, production, transfer and stockpiling of cluster munitions. To date, 113 countries have joined the CCM of which 84 have ratified the convention.

The press release that was issued today can be found here.
The full report and additional documents are available here.